Nearly every Monday, I try to be sure and issue thoughts on the 8 to 14 day forecast on my NECN weather broadcasts at 9 PM, 10 and midnight.  Monday night's forecast of a transition to a much colder, winter pattern for New England may seem far fetched to the unsuspecting, given the current weather pattern (though some of New England technically is marked as "Above Normal," I noted that is largely because of a relatively warm start to next week).  Recent November warmth has been remarkable in the Northeastern United States and much of the East Coast, at large.  In fact, in the last month, over 900 daily warm maximum high temperature records have been tied or broken nationwide.  On Monday, only a few records were tied or broken - one in Bangor, Maine, and another in Newark, New Jersey - but high temperatures soared throughout the Northeast.  Consider the following warmest Monday temperatures, by state:

Meanwhile, snow was falling across Western Tennessee - providing some snowfall amounts that were one to two months early, climatologically speaking.  That snow was falling in a pool of cold air, however, not a widespread cold outbreak, and temperatures in the 60s and 70s were observed farther west, across the Central Plains.

So...are there signs of more meaningful cold air?  There is somewhat colder air in Central and Southern Canada - high temperatures in the single digits, teens and twenties - but deep cold is positioned in Alaska.  In fact, the recent air has been so cold in Alaska that's it's made headlines as some of the earliest intense cold on record - check out this article from Fairbanks.  Often, cold air building in Alaska acts as a well of available cold that will spill over into Western and Central Canada, then invade farther south across North America, into the continental United States.  This transition to a colder, winter pattern, appears very close to unfolding.

Contrast the two images, here (courtesy of Alan Huffman's Weather Page) - both are lower atmospheric temperature anomaly plots...that is, indications of warmer and colder than normal temperature regimes.  The first image represents the pattern during the record warmth of this Monday, November 28.  Note the tremendous warmth of 10-15 degrees Celsius above normal in New England, and 14 degrees C below normal where snow was falling in Tennessee.  Colder than normal air is evident over Alaska, and spilling through Western Canada.  The second image represents the forecast average difference from normal temperature next Thursday, December 8.  Note the relative warming in Alaska, but that's largely because the well of cold air has emptied across nearly the entirety of the North American continent, including temperatures some 4 degrees Celsius below normal across the Northeast United States.  Keep in mind that this represents the average of several computer guidance perturbations, so actual cold anomaly may be more significant than indicated, but even if this forecast verifies perfectly, the normal high temperature by December 8 for someplace like Boston, MA, is 44 degrees Farenheit, so this would imply high temperatures on the order of 37 degrees.

It's also worth noting the lingering pocket of warmer than normal temperatures across the Southeast U.S. - I believe this is important.  For the past few weeks there have been consistent indications of a battle between cold north and warm south, starting during that first week of December and persisting deeper into the month.  This final map helps to illustrate the likely jet stream pattern on December 8, showing large areas of above and below normal temperature through a deep layer of the atmosphere - average temperature over approximately a 22,000 foot layer of air.  Note the large "ridge" of above normal temperature over the Eastern Pacific, and another, weaker "ridge" of warmth in the Southeast.  The jet stream flows between "ridges" of warm and "troughs" of cold, meaning we'll have a very interesting jet stream pattern - one that brings fast-moving, energetic, moist Pacific disturbances into Alaska and Western Canada, then dips these disturbances south as they pick up cold air and more energy from Northern and Central Canada, then encounter available warmth and moisture from the Southeast US, while turning east-northeast toward the East Coast.  This is a favorable setup for several intensifying storm systems to provide a clash of southern warmth and moisture with northern cold and ample energy.  In other words, such a pattern favors a swath of repetitive snowfalls and mixed precipitation events, which very well be centered on the Northeast and New England. 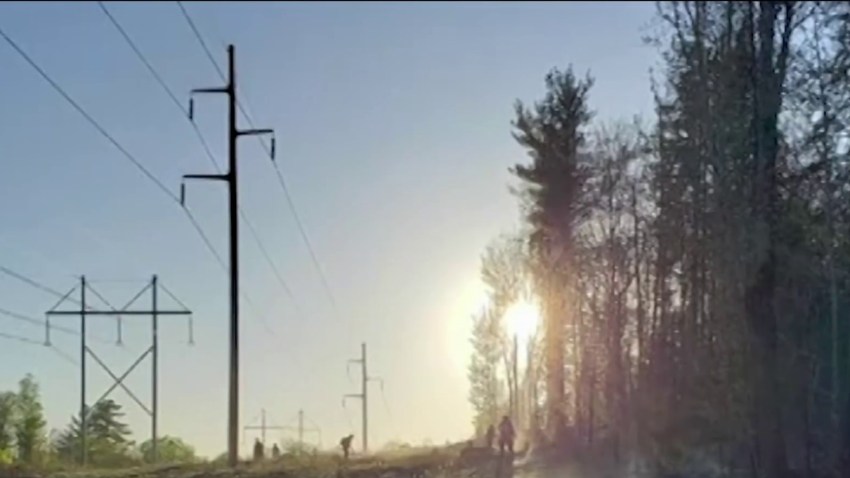 Prepare for the transition to winter.  It's already underway, and will be obvious from the middle of next week onward.