The first week of May 2014 featured some interesting weather in New England. The blocking pattern of late April released a bit allowing a cold front to pass New England on May 1st. But it got warmer for most of us. That is because the wind shifted. Instead of wind from the east of the cold ocean, the wind came from the west pushing the temperature back up into the 60s. But the air mass was technically colder. As is typical this time of year, we had colder air up in the sky, with warmer air down low. This creates instability showers. But the snow level was fairly low, around 3000 feet the first few days of the month. Jay peak got 2 inches of snow on May 4th. The summit of Mount Washington had snow much of the first week of May, the most falling on Sunday the 4th, about 8". By the time snow ended on Mount Washington Wednesday the 7th, the monthly snowfall was 13", the average snowfall for May is 12.5".We got a special treat from our Aerial photographer Bill Hemmel, who shared this picture of the mountain, taken Thursday May 8th.

Thursday May 8th is also the same day we had Ice Out at Moosehead Lake in Greenville Maine. Michael McCormack shared this Time Lapse video from his Blair Hill Webcam.

Rainy Close to Weekend, Thunderstorms in Parts of Region 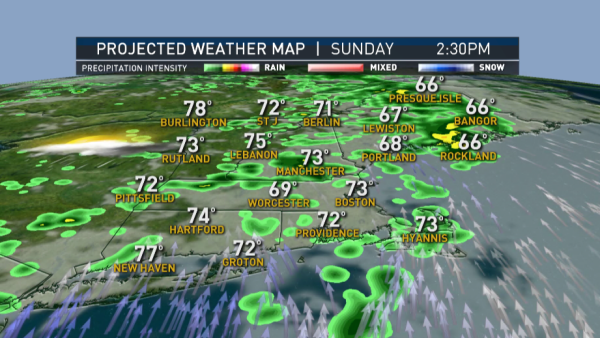 Then it was suddenly like Summer. On Friday May 9th the temperature reached a record high 89 in Dansville New York. That warm and humid air arrived in New England Saturday the 10th with the first widespread 80 degree day in New England (though Vermont was 80 on April 14th). There were plenty of showers and storms around. But on Mother's Day Sunday the 11th another cold front (with warm air behind it) cleared us out, leaving low humidity and brilliant Blue Sky. Once again much of New England warmed to 80. A perfect day for Tuckerman Ravine. All that snow and rhyme from Thursday was gone, but the snowpack in The Ravine looked great from the Wildcat Mountain web cam.

Must see images of the, now open to tree line,Mount Washington Auto Road. Click on 'Featured Pic' on their web page.

Hurricane Season in less than 3 weeks, we may have a shot over the bow with Hybrid (mixed with Polar) Tropical Trouble this week.