A display of Northern Lights is possible for Southern Canada and the Nothern Tier of the United States, centered on Thursday night, possibly visible as far south as Boston, Chicago and Seattle, away from city lights. Read on for more detail about the luck and timing that's needed to see these events, but if you are fortunate and grab a photograph, always feel free to send via Twitter @MattNoyesNECN, Facebook at Matt Noyes: Broadcast Meteorologist, or email!

You may have already heard about the "X1.2 Class Solar Flare" that erupted on the surface of our sun this past Monday, January 7, from a sunspot cluster classified as "AR1944." For those not exactly sure what that means, the short version is there's an active spot on the sun that ejected a massive amount of solar material. This ejected material races through space, colliding with Earth's "magnetosphere," at the top of the atmosphere, exciting particles and resulting in displays of astounding color and beauty, called the Aurora Borealis, or Northern Lights.

Here is a stunning video of the flare that occurred Monday: 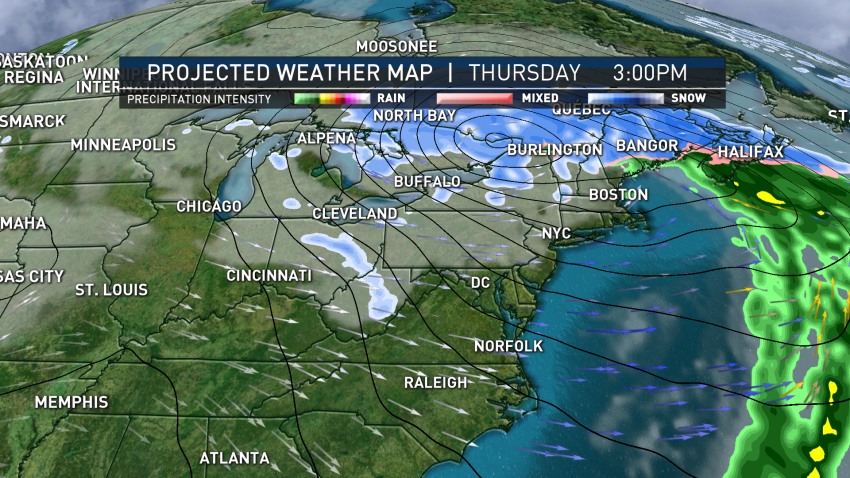 It's quite difficult to accurately predict how impressive - and more importantly, in exactly what area - Northern Lights displays will occur. Believe it or not, it's even hard to predict exactly what time the greatest particle excitement will occur, and therefore when the most impressive display of Aurora will occur. That said, general windows of time can be given, and NASA has issued a Space Weather Watch from 7 PM EST Wednesday (this evening) all the way through 7 PM EST Friday. The expected magnitude of the resulting Geomagnetic Storm is up to a "G3," which corresponds to intermittent satellite navigation and low-frequency radio navigation problems. It also corresponds to a display of Northern Lights that can be seen as far south as Southern New England (away from light pollution) IF all goes perfectly. Surely, the farther north one is through Northern New England, the Northern Tier of the US, and Southern Canada, the better one's chances of seeing a display of Aurora. The center of the timeframe in question is Thursday night, so this is generally accepted as the most likely time for a display to occur, if it's going to. In fact, the map below illustrates the ring of potential Aurora display, issued by the Geophysical Institute. The shaded ring represents potential displays directly overhead, and the southern ring represents potential displays on the low northern horizon:

Whether you see a display or not hinges both on location, timing and luck, but I'd suggest keeping the camera at the ready, and keeping an eye to the Northern Sky, Wednesday night through Friday, but particularly Thursday night...and please don't forget to send photographs if you take them! On Twitter @MattNoyesNECN, on Facebook at Matt Noyes: Broadcast Meteorologist, and on email.