After a rather innocuous disturbance touched off widely scattered showers in Southern New England Tuesday morning and midday, and a broader shield of rain north, warm air has returned to the region.

Another, stronger disturbance aloft will move through the region early Wednesday morning, prompting the development of showers, downpours and thunderstorms, feeding off available warmth and moisture.  Ahead of the incoming energetic upper level system, winds will increase from the south through all levels of the atmosphere, meaning a burst of windswept downpours and thunderstorms is likely Wednesday morning, with some wind gusts capable of causing localized damage in the form of downed tree limbs and power lines.

Wind:  A broad area of wind will strengthen from the south through a deep layer of the atmosphere late Tuesday night into Wednesday morning.  In the lowest 5000 to 6000 feet of the atmosphere, the wind will primarily be oriented to blow from the south and south-southwest, and this will promote strong gusts on the order of 45-50 mph at south facing coastal locations from Southern Connecticut east to Cape Cod.  Farther inland, hilly terrain will be most vulnerable to seeing similar wind gusts.  Typically, cool ocean water would limit the potential for strong gusts, but this time of the year, water south of New England is still warm, and not much inhibiting factor is likely.  This map illustrates forecast wind at about 2000 feet in altitude, at 8 AM Wednesday - a decent estimator of potential highest surface wind gusts (map is in knots - broad purple area is 50-55 knots, or about 60 mph wind):

Rainfall:  Given expected storm cell motion of around 50 mph, total rainfall amounts will be limited outside of the stronger downpours and thunderstorms in Southern New England.  In Northern New England, slower motion and a broader area of rain is likely to result in higher rainfall amounts, especially where wind pushes up against mountain faces ("upslope wind").

Severe Thunderstorm Potential:  In events like this, with a broad wind field but relatively narrow corridor of rapidly rising air conducive to thunderstorm growth, severe thunderstorm potential is often limited to only scattered coverage where strongest thunderstorm cells develop and migrate.  In this instance, though wind in the lowest levels of the atmosphere is nearly unidirectional from the south, there is enough rotational component aloft to support rotating updrafts - a necessary component of tornado development.  That said, limited instability (not much heat/humidity) and a fast-moving, brief window of opportunity for strongest storm development (focused from about 4 AM to 9 AM, west to east), means any severe storms or potential for isolated rotating storms to develop would be in short-lived spin-ups that would likely produce isolated damage confined to narrow corridors, where they develop at all.  Nonetheless, this will necessitate a close watch on the radar throughout the morning.  Several forecast parameters are shown below.

Forecast Radar at 8 AM:

Forecast Instability at 8 AM:

Forecast Parameter of Available Storm Energy and Tendency for Rotation, valid at 6 AM, shows Connecticut with the highest combination of both strong storm indications:

Of course, I'll be live on NECN between 5 and 10 AM, as always, providing updates. 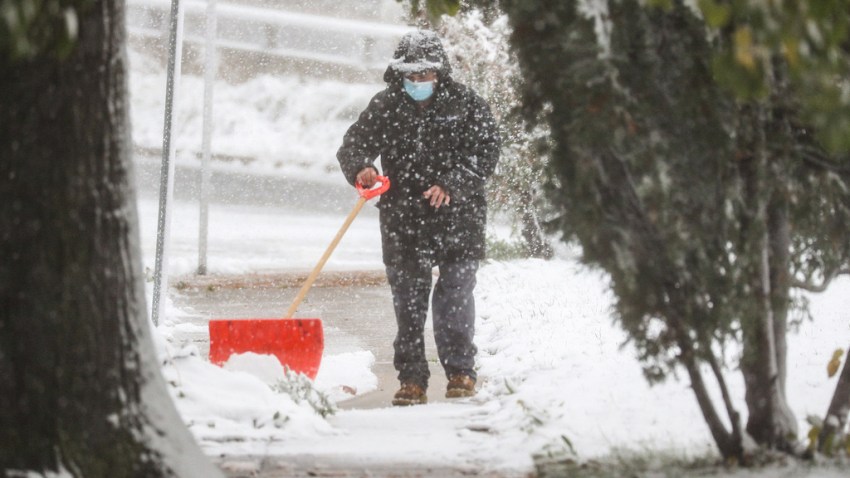 Will All This Snow Melt in Time for Halloween Trick-or-Treating in New England?