Our projections show the most affected cities with the risk of receiving a total 4 inches, with eastern and southeastern Massachusetts, Rhode Island and southern Maine especially vulnerable

Cloud coverage will continue in New England Wednesday afternoon until the area of low pressure to our south starts shifting north.

We expect heavy rainfall overnight as this systems lingers over the region.

Rain begins Wednesday afternoon in southern states and will head into Maine after midnight, producing pockets of heavy downpours between 1 and 7 a.m. The duration of these downpours will produce more than 1 inch of accumulation and the risk of receiving more than 2-3 inches of rainfall in localized spots. Our projections show the most affected cities with the risk of receiving a total 4 inches.

The areas of vulnerability for now are eastern and southeastern Massachusetts, Rhode Island and southern Maine. Vermont seems to be excluded from these tropical downpours, as well as the outer western cities of Massachusetts and Connecticut.

Would you consider it quick? Rainfall will be mostly out of southern New England by lunch time Thursday, yet we’ll be waking up with some flooded streets and this could be a danger for the commute that morning. 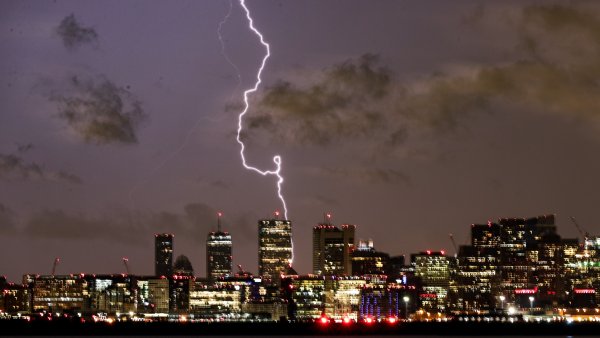 Severe Thunderstorms in Morning Give Way to Damp, Cooler Thursday

Plan ahead of time and get out a few minutes early in case you must take alternate routes to prevent crossing flooded roads.

Friday will see a mix of sun and clouds, but we can’t forget about the humidity. We’ll have somewhat sticky conditions for the next couple of days, and temperatures will be rising to the mid 80s and a few spots might have a heat index near 90.

Clouds come back Saturday evening and into Sunday as a frontal system sinks from Canada and brings rain chances back up.

A tropical ridge will settle in the East Cost early next week and will bring back a humid summer feeling we missed out on during much of July.

Gov. Phil Scott of Vermont toured the damage to infrastructure brought on by severe weather earlier this month.