That same weather system from Tuesday is still in charge. Low pressure stalled to our north continues to bring our air down from eastern Canada. 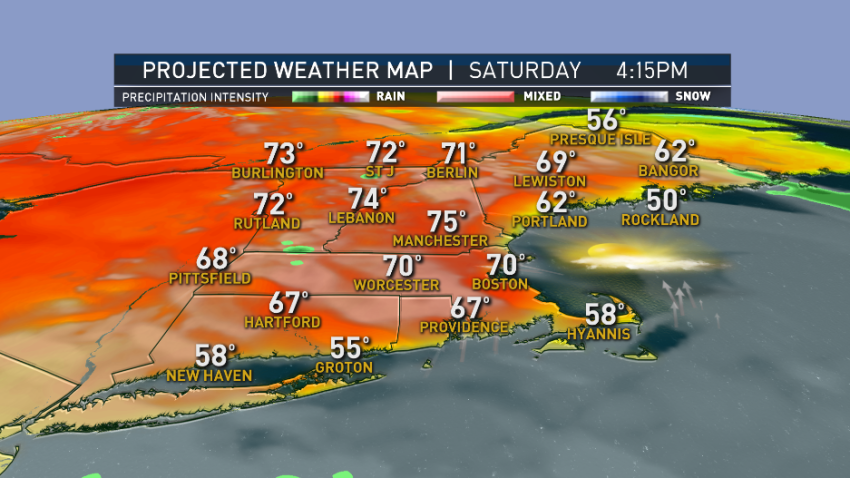 Saturday Will Be Another Gorgeous Spring Day. Here's What to Know

Pulses of energy coming around that low pressure system are causing the fluctuation in temperature and wind. That trend will continue through the weekend.

Snow showers are re-developing again in the mountains of Vermont and Northern NH, otherwise we have more sunshine than clouds with temperatures in the 20s to low 30s from north to south.

Snow showers continue in the mountains overnight, it will remain breezy, but not as windy as last night, with low temperatures in the single numbers in teens north, teens and 20s south.

We have many instability clouds for tomorrow which could result in snow flurries all the way into Southern New England. It will continue to snow off-and-on in the higher terrain west and north. The most sunshine will be in eastern New England.

More of the same tomorrow night and Sunday, although we should dry out the atmosphere allowing for more of a clear tomorrow night, and more in the way of sunshine for Sunday. Once again temperatures starting the single numbers and teens, going up to the 20s and lower 30s.

Sunday night continues cold, and with high pressure right over us. It could be one of the colder mornings of this outbreak.

But at least the wind should die down

Sunshine will fade on Monday as a warm front approaches from the west, high temperature close to 40°.

A few snow showers at the Canadian border Monday night, followed by clearing on Tuesday with a temperature getting into the 40s for most of New England, still cooler to the north.

The warm-up really begins Wednesday and may continue into Friday with temperatures jumping up into the 50s and 60s. It’ll probably become windy from the southwest with showers approaching.

It’s a tough call on when the next cold front goes by, but there will be a few showers and downpours as the cold air tries to press back in late in the week and next weekend.

Next weekend could be interesting as waves of low pressure will come along that front stalled near New England. That means rain or snow is possible.

Stay tuned to the latest in our First Alert 10-Day Forecast.