Sun to Come Out for Mother's Day Morning

Sunshine will greet us on Sunday with a wind out of the west northwest, which means warmer air

A gray start to the weekend courtesy of an offshore coastal storm and an area of low pressure over New York and Pennsylvania.

Temperatures will remain in the 50s, especially near the coast thanks to an onshore wind, with a few inland locations around 60.

Scattered showers are possible Saturday afternoon and evening, especially over Central and Western New England due to a cold pool of air aloft that may even trigger small pieces of ice, called graupel. Partial clearing is expected tonight with temperatures dropping into the 40s. 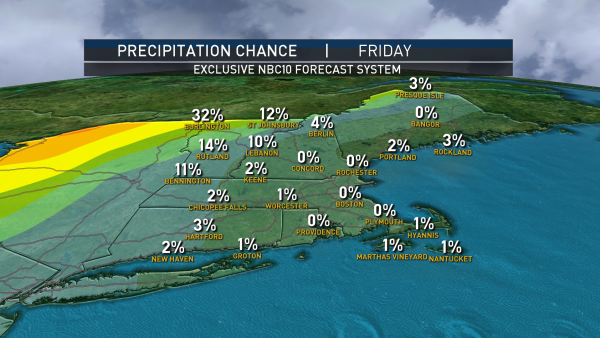 Here's When Thunderstorms Could Hit New England This Weekend Sunshine will greet us on Sunday with a wind out of the west northwest, which means warmer air, so highs will climb rapidly into the mid and upper 60s by afternoon, while cooler at the south facing shorelines.

Most of us will have a rain free Mother’s Day with the best weather happening late morning into early afternoon. Clouds will increase as the day goes along and an area of low pressure will approach from the southwest late tomorrow, bringing a chance for rain near the south coast after dinner time and slowly spreading east.

That system will stall east of Maine sending a brisk northwest wind our way on Tuesday.

Some instability showers are possible in Northern New England, where the mountain tops of Vermont and New Hampshire may get coated with a little bit of snow. It will be breezy Wednesday but also warmer with highs in the 60s and plentiful sunshine.

Highs Thursday will climb into the 60s and 70s under a mostly sunny sky, that’s the pick of the work week, before rain returns Friday into Saturday as we track the possibility for another coastal storm.