Our Wednesday morning, snow continues to shift southeast and will end last on Cape Cod, but leaves accumulation all the way to the Outer Cape and Nantucket by early afternoon.

The highest accumulations were recorded in the higher terrain of southern New England and reached around half a foot. Meanwhile, 2-to-4-inches fell for many others from southern New Hampshire to the South Coast of the region.

Clearing skies Wednesday afternoon will leave cold conditions with a busy northwest breeze that will knock wind chill values into the single digits. This will result in black ice in areas where moisture lingers on roadways. 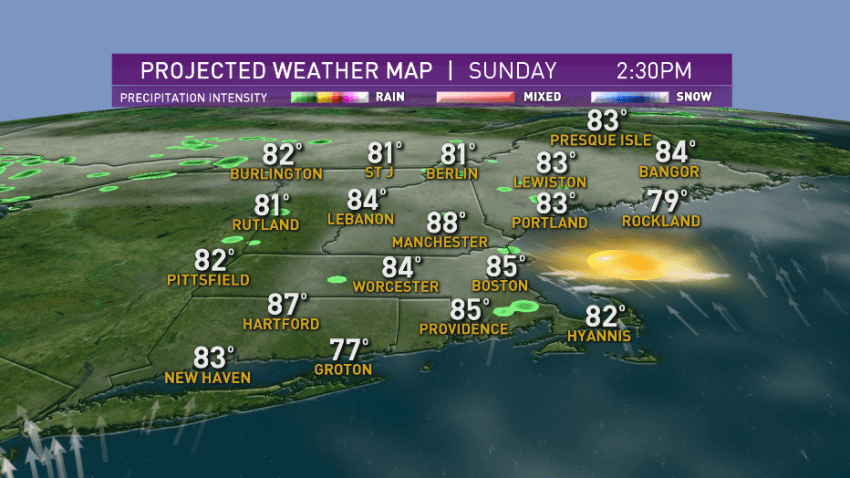 Temperatures Continue to Climb; Possible Heatwave on the Way

Thursday brings wintry sunshine with highs struggling to reach 30 degrees as high-pressure crests overhead. This will be before a new storm develops out of southeast United States. It will travel up the Eastern Seaboard with a slug of rain that will start as clouds Friday, then evolve to sprinkles and developing showers late Friday and heavy rain Saturday.

When it all starts here in New England late Friday, some pockets of overnight freezing rain are possible in valleys of northern New England before all communities transition to rain.

Residents are cleaning up yet again after another snowstorm moved through parts of Massachusetts.

Downpours Saturday will produce around 2 inches of rain, causing street flooding and possibly pushing small rivers to flood levels by late Saturday into Sunday.  While water will still be running into rivers and streams Sunday, the bulk of rain will be gone and sun will be breaking out again.

However, a few showers are still possible from time to time, particularly in northern and western New England.

After another shot of cool and dry air early next week, our next coastal storm is expected Tuesday, probably with a rain/snow line but this time perhaps leaning more toward snow before quieting again at the end of next week in our exclusive First Alert 10-Day Forecast.