Two to four inches of snow is possible in western Massachusetts, with a coating to two inches for the rest of the impacted area

There are three major players in our New England forecast for the upcoming weekend: a strong storm in the Central Atlantic, a strong fair weather cell in eastern Canada, and an energetic disturbance drifting east from the Midwest.

Each feature will impact New England between now and Monday.

The storm in the Central Atlantic is no longer being monitored by the National Hurricane Center for any tropical development, but has continued to be a powerhouse, non-tropical storm in its own right. It is generating 40 to 50 foot waves over the open ocean. Hundreds of miles from that storm center, waves arriving to New England this weekend won’t be nearly that ferocious, but offshore waves will build 12-20 feet Saturday and Sunday, with near-shore waves of 8 to 12 feet.

Meanwhile, the large fair weather – or high pressure – dome over eastern Canada has a clockwise flow of air around its center, inducing a north wind Friday and a northeast wind this weekend.

The northeast wind is important because it blows over and across the ocean, resulting in two impacts: 1) the incoming waves will hold onto some power for spots of beach erosion and water will collect enough at high tide for minor coastal flood potential at a midday high tide Saturday in pockets along New England’s South Coast and Islands, and 2) the onshore flow will carry moisture through the atmosphere, meaning lots of clouds for many.

The first impacts are already being felt Friday on Cape Cod, where – like the rest of New England – sunshine and brisk air makes for a cool but decent winter day, but on Cape the north wind gusts to 45 mph by day’s end.

Overnight Friday night, the clouds expand off the ocean, temperatures drop to the 20s for many, 30s on Cape Cod and winds on Cape continue gusting to 45 mph from the northeast. Saturday’s clouds will be accompanied by a spray of light rain showers that may mix with snowflakes at times, though Sunday is likely to deliver more in the way of snowflakes in ocean-spraying showers.

Regardless, both days won’t break from the 30s for high temperatures with the steady northeast wind creating a wind chill in the 20s for the coldest daytime feeling of the season. Outside of Route 495 in southern New England, and across central and northern New England, ocean spray rain and snow showers are far less likely.

By Sunday evening, our attention will turn to the third major player in our forecast: the energetic system tracking east from the Midwest. This disturbance enters the scene just as cold high pressure begins to relax its hold on New England, allowing moisture to stream in from the west and encounter the cold air still in place. The result will be three to five inches of snow in Upstate New York that will weaken slowly as it moves east, but should carry organized enough snow showers and a shield of light snow for light accumulation Sunday evening and night, west to east, respectively, across southern New England and southern Vermont to southwest New Hampshire.

Two to four inches of snow is possible in western Massachusetts, with a coating to two inches for the rest of the impacted area, with snow unlikely to reach northern Vermont, central and northern New Hampshire and Maine. 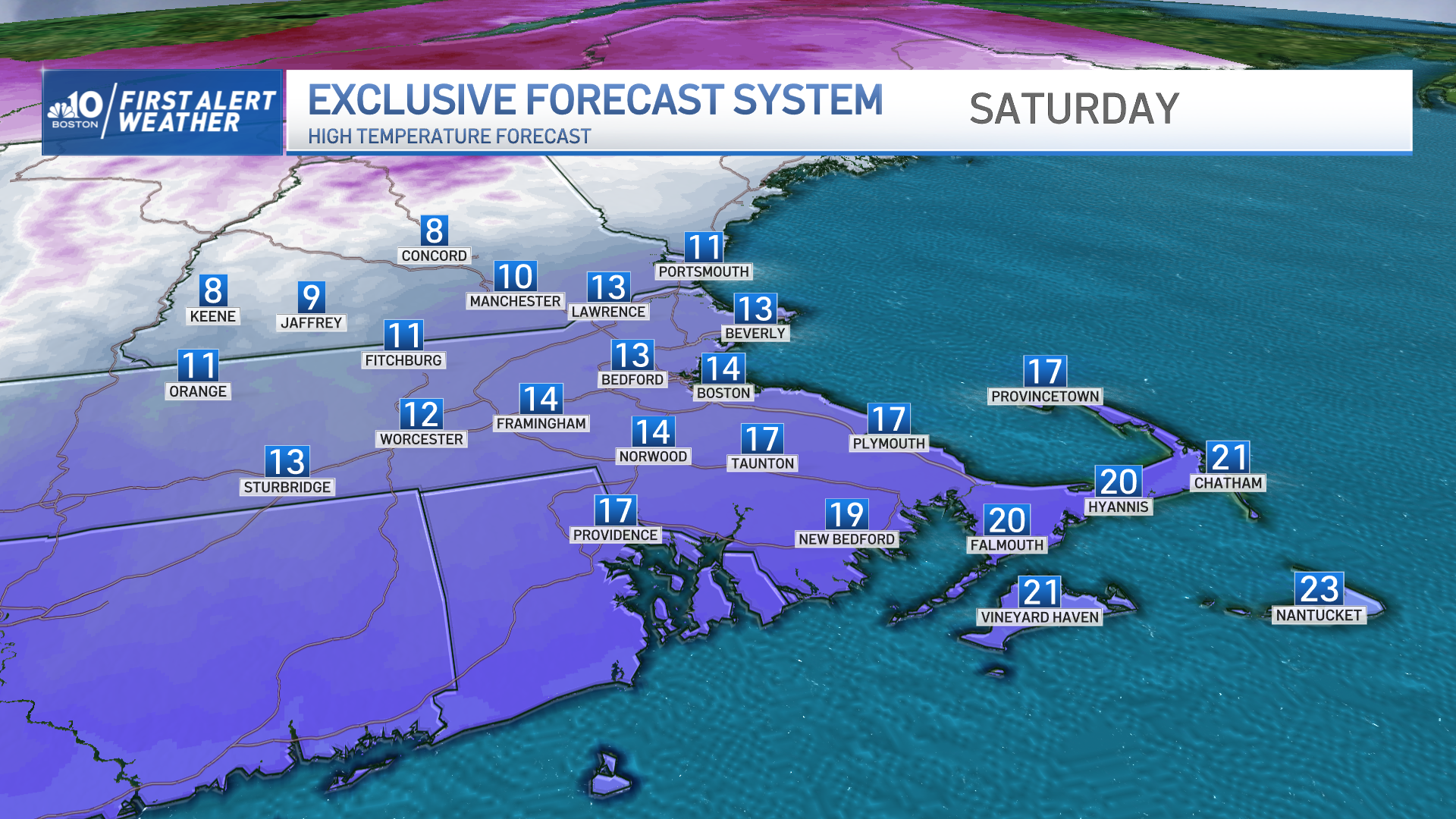 Snow exits for Monday morning and sun returns to the forecast through midweek, but winter’s chill lingers until the next approaching storm – loaded with moisture next Thursday into Friday – drags warmth northward for likely rain in the Metro areas of southern New England but a rain/snow line possible somewhere in central, western or northern New England. Our First Alert team will keep you posted as the weather pattern turns active and wintry for the days ahead!