Low pressure is traveling across northern New England into Central Maine with a cold front two generating another day where we have to keep an eye on the sky. Scattered thunderstorms, perhaps even a squall line may form this afternoon.

For most of us, most of the day won't feature rain, but when it does rain it can really pour, and the isolated, strong-to-severe thunderstorms that are being warned may cause some local wind damage.

Once again we woke up to scattered showers and thunderstorms at sunrise. These were leftovers of storms that formed well off to our west yesterday and last night. 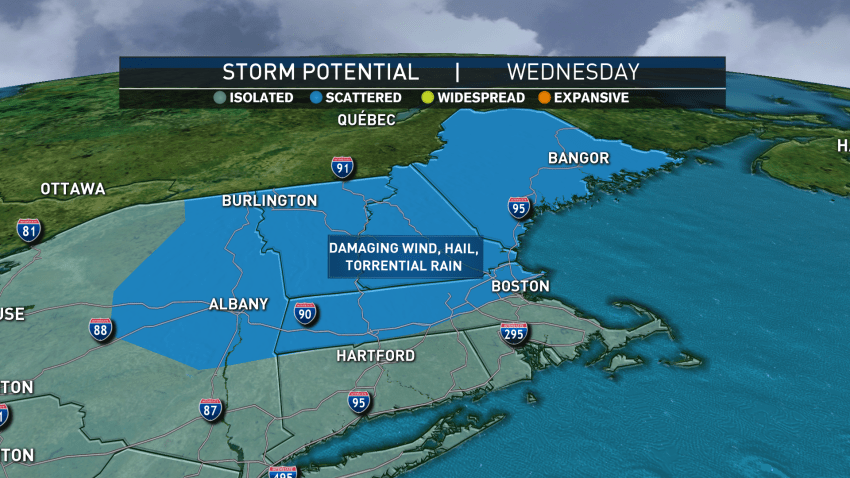 Some of the showers are intense, especially from Narragansett Bay to Buzzards Bay and Cape Cod and the Islands, where thunder has been reported again. There’s also a lot of humidity with patchy dense fog.

High temperature well into the 80s with a gusty wind from the southwest and dew points near 70 degrees.

But we are in the final hours of this feel of Florida weather in New England today. Showers and thunderstorms will dissipate as the sun goes down, leaving us a nice view of the just-passed full moon tonight.

It’s a good night to turn off the air conditioner and open the windows. Almost the same timing as we had last weekend.

Sunday features plenty of sunshine and Western New England but clouds will bubble up in eastern New England with a few instability sprinkles possible. High temperature in the 60s in the higher elevations to 70s toward the coast with the wind from the north at 15 to 25 mph.

Sunday night looks clear and almost chilly with a low temperature in the 50s south, 40s north. Parts of northern Maine may actually fall into the 30s once again, a lot like last Monday.

Monday and Tuesday look beautiful with sunshine temperatures in the 70s Monday, back to the 80s Tuesday.

This weekend we are tracking tropical cyclone Cristobal in the Gulf of Mexico. It may strengthen back to close to hurricane force near Louisiana Sunday night, then it’s going to race due north into Canada by the middle of next week.

It will attach itself to a front moving out of Canada, and bring us some windy weather Wednesday and Thursday with a chance of thunder as humidity returns again later in our first alert 10-day forecast.