This weekend will be dry, with a few mountain flurries, but partly cloudy Saturday and sunny Sunday.

It will be a nice weekend for New England before Monday and Tuesday when we have a First Alert declared for a powerful storm that will bring in damaging wind and heavy rain.

Friday evening we have many clouds, even another round of rainbows with a few showers at sunset, like Thursday but fewer and further between.

Highs reached the 50s even with a general cloud cover. Tonight's lows drop to the 40s with mostly cloudy skies and patchy fog. 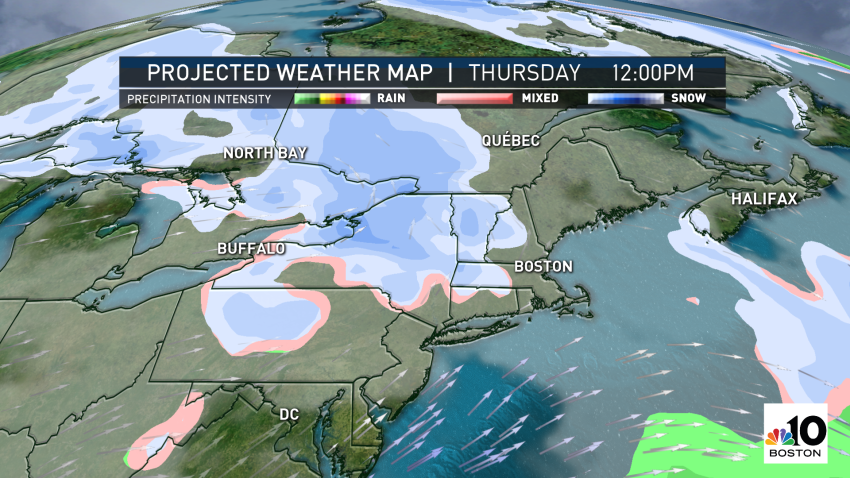 Storm-Free Week Ahead for New England, But the Sky Above Will Be Active A weak and relatively dry cold front moves through Friday night and cools our temps this weekend. This weekend will be dry, with a few mountain flurries, but partly cloudy Saturday and sunny Sunday. Highs on Saturday reach the mid 50s, with Sunday around 50 degrees.

Monday into Tuesday we have a potent low pressure system that will become a cutoff low over the Ohio Valley. As strong high pressure remains east of us, the wind speed increases as the low deepens to the west early in the week. So winds will be damaging, with peak gusts between 50 and 60 mph on the south coast, up to 50 mph inland. The wind direction is more from the south or southeast so this will lead to more damage potential and outages.

Our wave heights will be 10-15 feet and tides are astronomically higher due to the full moon, but not as high as the king tides last week. We will monitor the coastal flood threat, which looks to bring minor flooding at this time. Rainfall of 1-3" looks probable, too.