The players are on the map across the eastern two thirds of the United States for the upcoming ocean storm that will bring a shot of substantial rain to some, but not all, of New England.

Since it's the most substantial or sizeable rain in some time, and set to fall during the morning commute, the NBC10 Boston weather team has added a First Alert stamp for Wednesday.

Before any raindrops fall, another dry day Tuesday is accompanied by an increasing northeast wind that will gust as high as 30 mph by day’s end, combining with the exceptionally dry landscape to boost brush fire danger, making any brush burning a bad idea in most of New England Tuesday.

Sunshine yielding to clouds is the first sign of change in the atmosphere as multiple energetic disturbances at the jet stream level start consolidating off the Atlantic Seaboard, south of New England, throwing a veil of clouds north into our New England sky.

First showers are expected to arrive from southeast to northwest off the Atlantic Tuesday late evening on Cape Cod, expanding across eastern parts of southern New England by Wednesday morning.

During Wednesday, the strengthening ocean storm will move north, passing east of New England en route to the eastern Gulf of Maine by late day. That will keep a busy north wind over New England with gusts to 35 mph, particularly at the coast and on Cape Cod, with periodic rain drifting from south to north, settling into Maine as the storm center slows and makes an approach to the eastern Maine coast by Wednesday night.

Rain totals will range from less than a tenth of an inch in southwest New England to around half an inch in central New England to over an inch in parts of Maine, making a measurable dent in the drought for the Pine Tree State. The persistent onshore wind Wednesday will churn the seas to between four and eight foot waves, creating high surf and rip currents at most exposed beaches, and some of those rip currents will likely linger into Thursday. 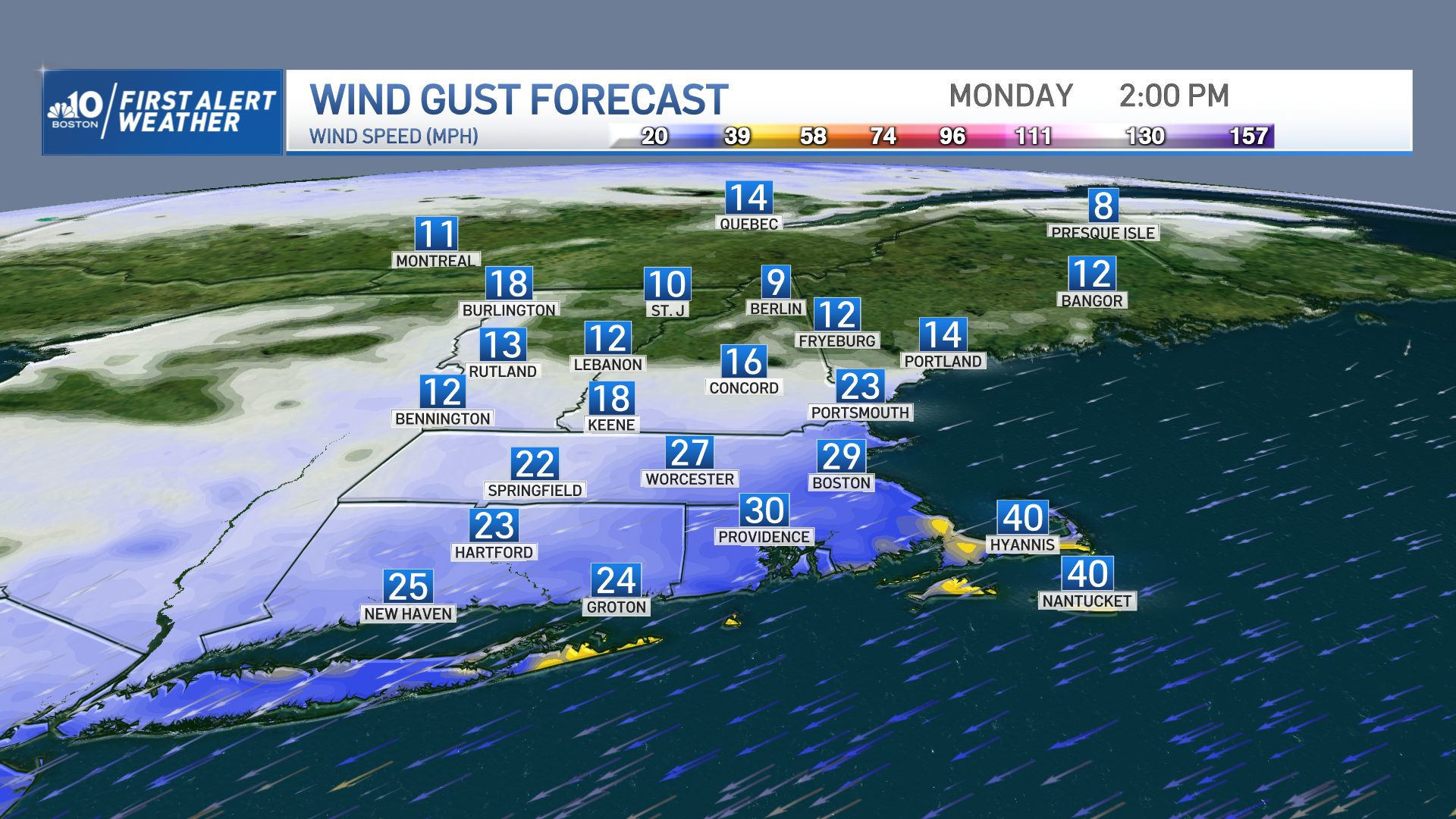 Cool and Windy Start to the Work Week, Showers to Follow

By Thursday, the storm center will slowly decay over Maine and will continue to produce cool showers over northern New England, while southern New England transitions to emerging breaks of sunshine with a drying but gusty west wind that may exceed 35 mph in stronger gusts, quickly drying what little rain will have fallen.

Friday through Monday is likely to bring another stretch of fair, dry and warm weather to New England with humidity increasing quickly near the South Coast but taking until Monday to increase appreciably for the rest of New England, bringing an increasing chance of late Monday showers or thunder and then a higher chance of rain showers Tuesday into Wednesday before likely drying out again for the end of next week, toward the end of the exclusive First Alert 10-day forecast.