Any showers Friday should end by midday with increasing sunshine in southern and eastern sections.

Thursday is the second day of our two-day-in-a-row winning weather streak.

The front that went out to sea, bringing in drier air a couple of days ago, is now coming back in from the ocean Thursday night with some rain and higher humidity.

For most of New England, though, before those clouds arrive, we should have a nice sunset and moonrise.

Temperatures Thursday afternoon are in the 70s, near 80, well away from the ocean, but there's a light breeze coming in from the sea keeping us cooler by the coast.

Clouds are getting thicker on Cape Cod and the Islands as the sun goes down, so the moon may not be visible. Thursday is the full "strawberry moon," named such because strawberries are ripe this time of year. And it is only about 224,607 miles away, That's a little closer than the average moon.

In Boston, the moon comes up at 8:47 p.m., with clouds on the southeast horizon, meaning it might might be not be the best view. It'll be much better viewing well to the west and north of the city.

On Cape Cod, the clouds already may be too thick. 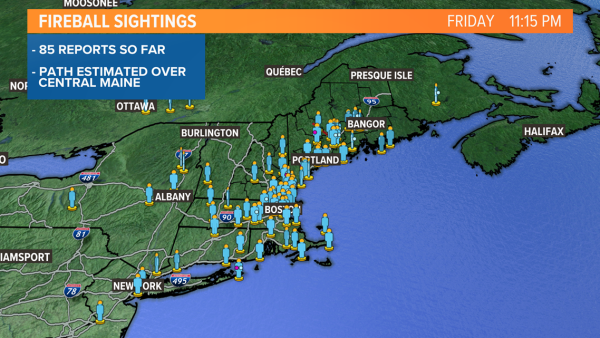 A weak wave of low pressure will bring a few showers and maybe some thunder to southern and eastern New England by midnight and through Friday morning.

Humidity will come up a bit with temperatures bottoming out in the 40s and 50s north and the 60s south.

After that the warmth comes on with humidity Saturday, along with a lot of clouds and a slight chance of a shower or thunderstorm. Highs on Saturday are in the 80s.

After that, we expect several days in a row near 90 degree for the second heat wave of June 2021.

A front is going to stall west and north of New England, and we may get some lingering showers and thunderstorms each afternoon. But most of the time, it will not be raining. However, when it does rain, it will really rain hard, with a chance of some significant thunderstorm activity, especially in western and northern New England with all the heat next week.

Heat will likely break with heavier thunderstorms Wednesday and Thursday.

July 4 looks like it'll still be fairly warm with a chance of some storms around. A classic July pattern is setting up, as seen in our First Alert 10 day forecast.