Burst of Snow to Hit Parts of New England This Week

We start off gray and not too cold again today.

Unlike yesterday there’s no heavy snow around. However there is some patchy black ice where we did have snow yesterday morning. Including the streets around New Hampshire where we have a mostly dry election day, with any icy spots melting by mid-morning.

Along the south coast we have a rather wet start with rain from Connecticut to Cape Cod, that rain will tend to ease out in the afternoon. We’re not expecting too much sunshine for New England today with temperatures in the 30s up north, and 40s to the south.

We should end up mostly dry even in southern New England by later in the afternoon. Wind is fairly light, but it’s coming from the northeast a rather chilly direction. High pressure pushes in tonight with clearing sky from north to south and low temperature in the 20s to lower 30s.

We should have sunshine for our Wednesday before clouds return late in the day, high temperature in the lower 40s, cooler north.

The next weather maker comes in Wednesday night with snow developing in southwestern New England around midnight. Snow will quickly change to rain along the south coast but for much of us it will be a wintry start, much like last Thursday.

Road crews will likely be necessary during the morning commute removing snow and ice, slowing down our Thursday start. 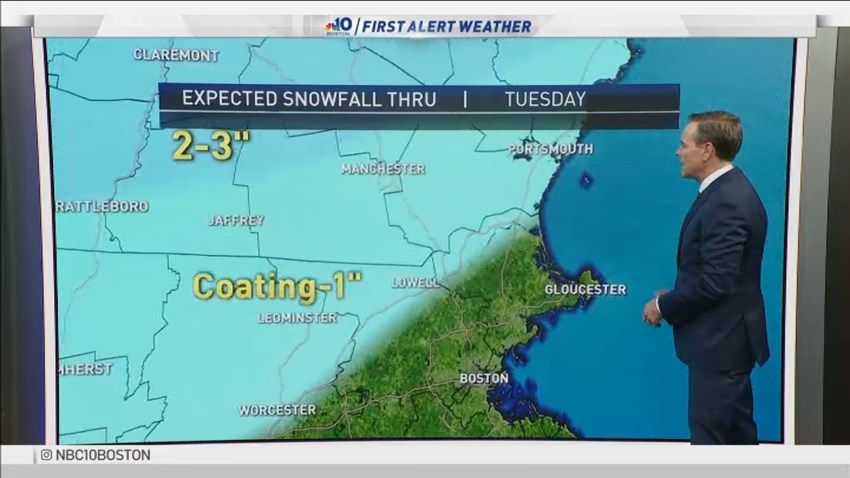 As the day goes on, warmer weather should change any wintry mix to rain in most of central and southern New England, with temperatures in the 40s by afternoon. But once again the mountains of northern New England should pick up close to a foot of snow.

Much colder air is expected to move in following the low pressure system that moves away to the east Thursday night. We expect clearing skies with plenty of sunshine for Valentine’s Day on Friday, with temperatures in the 20s to lower 30s. It may keep on snowing in some of the mountains though.

It looks like a bright cold start to the weekend with temperatures in the 20s Saturday, then clouds increase with temperatures back to 40 degrees Sunday. The early outlook for next week is for warmer weather returning, as seen here and our First Alert 10-Day Forecast.