Here is something different -- we have a real mid-winter chill out the door in New England Friday morning.

So far, this month has been running close to 10 degrees above normal per day! For a change, we take it in the other direction Friday. So we’re going to experience a bit of a thermal shock.

Thursday’s storm has eased east, but still has an influence with gusty winds from the northwest. The thermometer reads about 5 degrees north and 15 degrees south. When we add in wind gusting at 25 mph, that puts the wind chill factor near 0 degrees or lower for a many this morning. 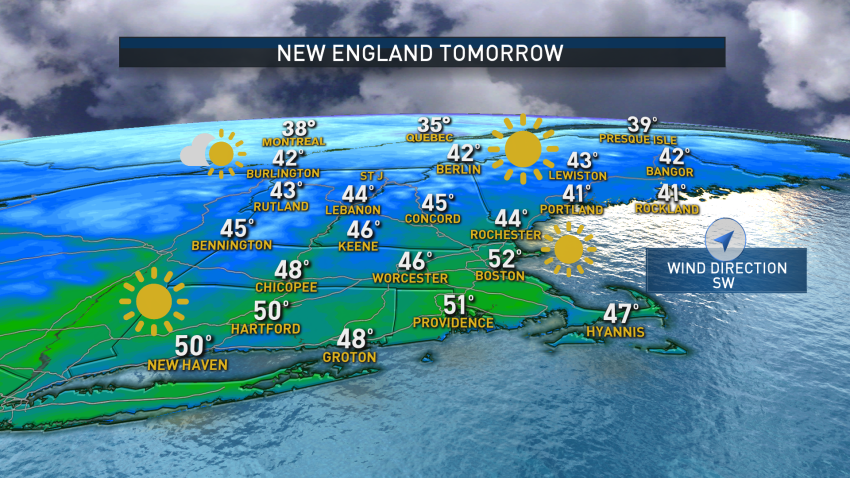 We have plenty of sunshine Friday with temperatures going up about 10 degrees from where we are now. But more importantly, the wind will diminish rapidly in the afternoon.

High pressure crests right overhead Friday night with a clear sky and light wind that allows for radiational cooling. Anywhere with deep snow on the ground will get well below zero. For most of us, it's about 5 to 15 degrees once again.

The next storm system that’s been sweeping from west to east across the nation arrives here Saturday afternoon. We are all cold enough for an initial burst of snow. Even at the south coast, we can expect a couple of hours of snow with an inch or two possible before changing to rain.

Snow arrives west of the Connecticut River by about 2 p.m. then to the Merrimack Valley by 4 p.m. if not sooner. Overspread in the state of Maine Saturday evening.

For most of us in southern New England, it will snow for 3 to 5 hours with a few inches of snow likely right during the dinner hours. Warmer weather with a gusty wind from the southeast will change from snow to rain Saturday night.

Well inland, we may have rain falling with sub-freezing low-level air, resulting in some icing. On a line from about Northfield, Massachusetts to Sanford, Maine and points north, it should be an all snow event.

A low-pressure system will be in the state of Maine Sunday morning, with drying weather and seasonable temperatures in southern New England. Snow will likely linger across the higher elevations of western and northern New England with a few more inches possible. Then, the wind picks up again from the north Sunday night and a new batch of Canadian chill moves in for Monday.

A warm-up looks likely the second half of the week, before more wintry weather returns by Friday or next weekend. At that point, it will be warm enough for a mix of rain and snow once again as seen here and our First Alert 10-Day Forecast.