It’s a little bit colder this morning, but in many cases it’s still not even freezing in southern New England.

Another weak front came through last night, with a few rain and snow showers, and now we have much drier air setting up a nice Thursday.

Much less windy today, with plenty of sunshine, high temperature in the 30s up north, 40s to 50 degrees south. Wind from the west is blowing 10 to 15 miles per hour diminishing to near calm around sunset.

We’re tracking a couple of weather systems that may have some impact tomorrow. A wave of low pressure crossing the Great Lakes states will bring some clouds in late today. And the storm that has been causing the flooding of the last couple days in the southeastern United States is moving off the coast of South Carolina and intensifying well out to sea

These two storms will come together for another powerhouse low pressure system over the water south of Nova Scotia tomorrow night and Saturday. But the phasing of the systems is happening so far out in the ocean, that there is a little impact in New England.

We will have thickening clouds tomorrow with a few snow showers in the mountains, and a few rain showers south late in the day. High temperature mostly in the 30s and 40s. Some spotty light snow tomorrow night may result in a dusting near the shore in southern and eastern New England for a change.

But the biggest factor will be increasing wind from the north and colder air coming in. Saturday looks like a bright and brisk day, fairly windy in the morning, but decreasing wind in the afternoon with a high temperature in the 30s south and 20s north. 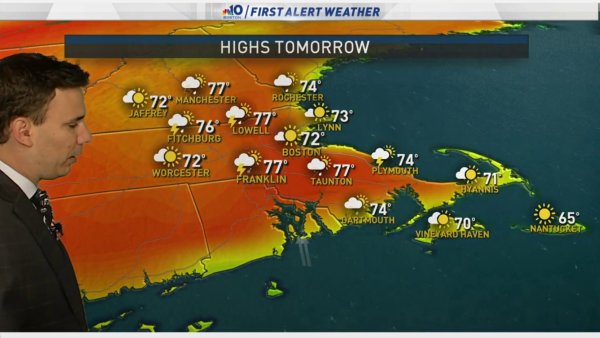 Forecast: Chance of Mid-80s This Week 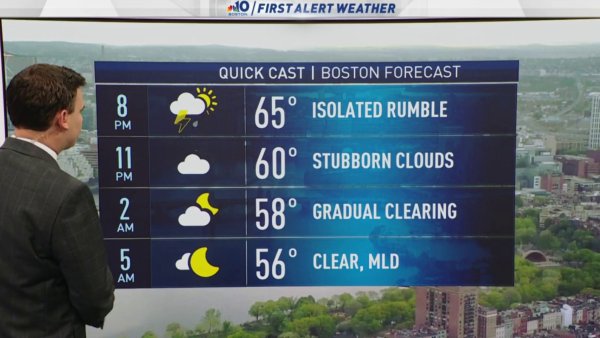 High pressure from Canada then moves to our south allowing for the return flow of warmer weather on Sunday. It looks like a great day with temperatures back into the 40s and 50s. Monday also looks good for most of New England, with sun and clouds and a high temperature in the 60s to near 70 degrees in southern New England.

But there is a sharp cold front in northern Maine late Monday, with snow and ice possible in Maine Tuesday, while clouds and showers are possible elsewhere. After that the forecast is challenging with very cold air in south eastern Canada and warmth along the east coast of the United States.

Several waves of low pressure will likely generate off and on rain or snow again the middle and second half of next week. Stay tuned to our First Alert 10-Day Forecast for the latest developments.