These common food safety mistakes can make your guests sick — here's how to avoid them.

Thanksgiving is a time for friends, family, and of course, food. But the cooking-centric holiday is also a time for a lot of mishaps in the kitchen. Some cooking mistakes have more dire consequences than others — a dry turkey may taste like cardboard, but an undercooked one may make your guests sick with food poisoning.

Foodborne illness is caused by eating or drinking something contaminated with disease-causing germs including bacteria, viruses, and parasites, according to the U.S. Centers for Disease Control and Prevention.

The top foodborne pathogens in the U.S. are salmonella, norovirus, clostridium perfringens, campylobacter, and staphylococcus aureus, per the CDC. These can contaminate many foods, including Thanksgiving favorites like turkey, especially if food isn't handled or cooked properly, TODAY previously reported. 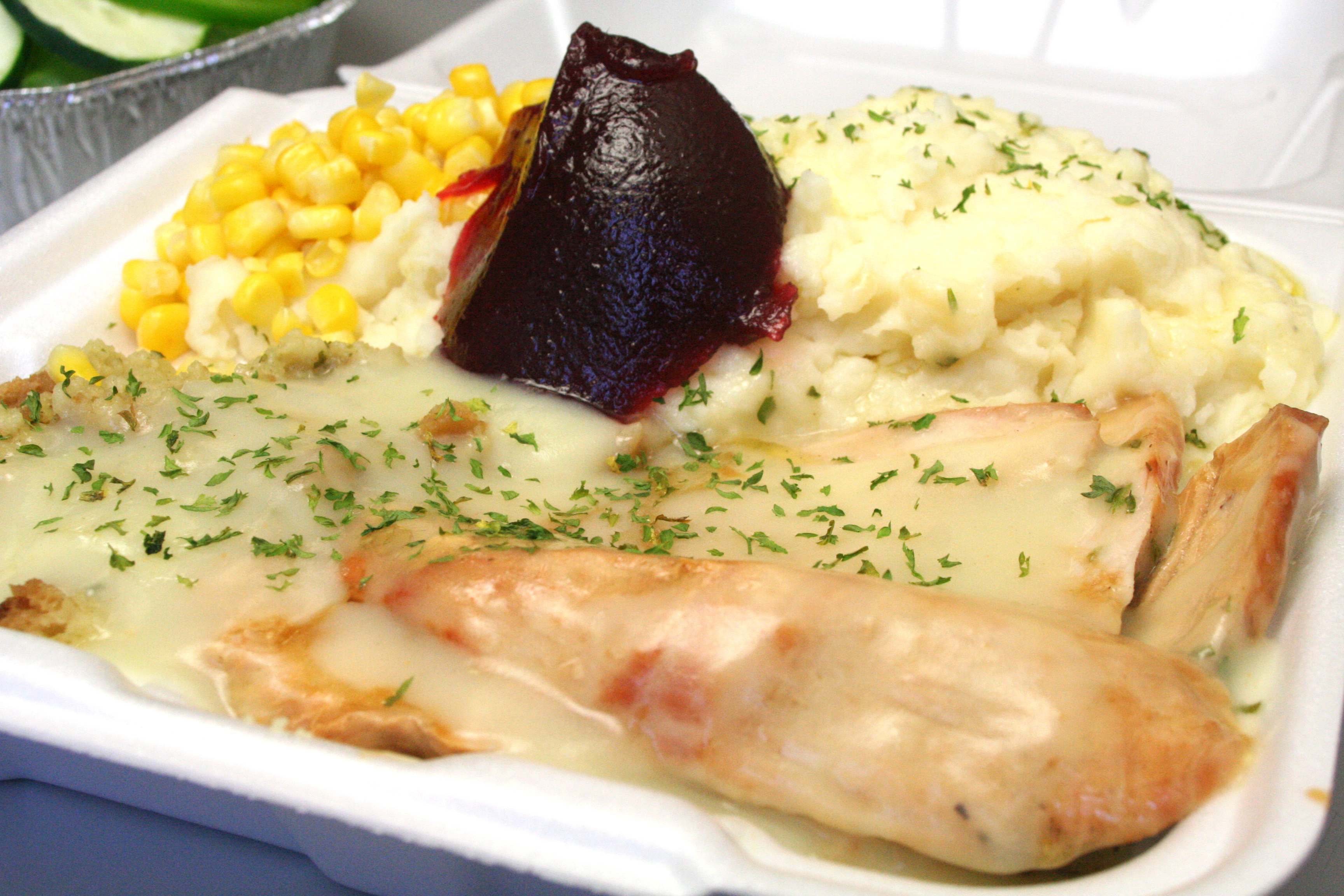 23 Places to Order Takeout Thanksgiving Dinner From This Year Here Are Some Creative Ways to Use Your Thanksgiving Leftovers

The symptoms of food poisoning — upset stomach, diarrhea, nausea, vomiting — typically resolve on their own within a few days, but they can become severe or deadly, TODAY previously reported. Children under five, adults over 65, people with weakened immune systems, and pregnant women are at the highest risk, per the CDC.

It's important that everyone, from first-time cooks to experienced chefs, take steps to prevent foodborne illness and keep guests safe. Here are the most common food safety mistakes people make while cooking for Thanksgiving and how to avoid them, according to experts:

Not Washing Your Hands Well or Often Enough

Washing your hands before, during, and after cooking is an essential food safety practice, not only during Thanksgiving but any other time you're preparing food for others. “Cleaning our hands for a full 20 seconds with soap and water can really go a long way in cutting down the amount of bacteria on our hands before we start preparation,” Robert Gravani, professor emeritus of food science at Cornell University, tells TODAY.com.

Pathogens from our unwashed hands can be introduced into food, Gravani says, where they can grow and multiply.

Always make sure you’re scrubbing your hands with soap and water and drying them on a clean towel — a quick rinse under the tap and wiping off on your apron won’t cut it.

You’ve planned, you’ve shopped, and you’ve prepared everything so you can hit the kitchen running on Thursday morning. But if you start feeling sick, you might need to find a replacement. According to the CDC, you should avoid cooking food for others while you are sick and for at least two days after symptoms stop.

Gastrointestinal symptoms like vomiting or diarrhea could be signs of norovirus, a highly contagious virus that can spread to others through contaminated food via unwashed hands, per the CDC.

Anyone with COVID-19 symptoms should test immediately and avoid gathering with other people until they feel better, TODAY previously reported.

Cooking With an Open or Infected Cut on Your Hand

If someone has an infected cut or burn on their finger they can actually introduce that bacteria into food while cooking, says Gravani — for example, when mixing stuffing with their bare hands.

These bacteria can enter the food and start to grow and produce toxins if the dish is left out for a period of time, Gravani says, which can cause illness when consumed later on. No one wants traces of blood or scabs in their food either.

Using the Same Cutting Board or Utensils for Everything

The same goes for utensils like kitchen tongs, spoons and spatulas. If you plan on using the same cutting board or utensils to cook all your Thanksgiving food, this requires strict hygiene.

“We need to make sure that we clean all those utensils very well after they come in contact with the raw poultry or meat,” says Gravani. Cutting boards, countertops, and any other tools should be washed thoroughly with hot soapy water after preparing each food item, says Ford.

Yes, most flour is actually raw, according to Laura Ford, Ph.D., epidemiologist in the division of foodborne, waterborne and environmental diseases at the CDC, tells TODAY.com.

This means it hasn’t been treated to kill any germs, per the CDC, so it needs to be cooked properly or it can make you sick. Raw eggs and raw flour can be contaminated with salmonella, E. coli, or other germs, says Ford.

That means no eating cookie dough or anything with raw flour and raw eggs that isn't cooked thoroughly. According to the U.S. Department of Agriculture, all dishes containing these should cook until the internal temperature reaches at least 165 degrees Fahrenheit.

If you want to fly home with your favorite Thanksgiving dish and don’t know if you should pack it or not, here are a few tips from the TSA on getting through security.

Rinsing off a Raw Turkey in the Sink

"Don't wash the turkey, or any poultry for that matter," says Gravani. Why? If salmonella or other bacteria is present, it can splash and spread all over the kitchen sink, counter, and other surfaces, Gravani says, which can contaminate other foods like fresh produce that won't get cooked.

So really, don't wash your turkey because it isn't helping in the foodborne illness department, only making things worse. "The USDA recommends that you not do it as well," says Gravani.

Defrosting a Turkey on the Counter at Room Temperature

A common Thanksgiving food safety mistake a lot of people make is leaving a frozen turkey on the counter to thaw, says Gravani.

Once the raw turkey enters the danger zone, any organisms that are present like salmonella will grow and multiply rapidly, Gravani says.

"The temperature becomes unsafe, even if the center still frozen the germs could grow,” says Ford.

Not Planning or Timing the Defrosting Process

There are three ways to defrost a turkey: in the fridge, cold water, or microwave.

"In the refrigerator, it takes 24 hours for every four to five pounds of turkey," Gravani says, adding that if you're defrosting a 20-pound bird, you'd have to start the process four to five days before, so planning ahead is very important. The turkey should be kept in a sealed bag or container so its juices don't drip onto other foods in the refrigerator, says Ford.

Then there's the cold water method, which is a bit faster but requires more attention. "First make sure that the original package is intact so that the water won't leak in and soak the bird," says Gravani. The cold water should be changed every 30 minutes until the turkey is thawed, says Gravani, and it takes 30 minutes for every pound of turkey.

"The last method is in a microwave oven," says Gravani, adding that people should check the owner's manual of their microwave to be sure of the right power level to use and and how many minutes per pound they need to defrost the turkey. "Certainly the size of the turkey is going to be a concern, some turkeys are very large and some microwave ovens aren't," says Gravani, so make sure your turkey can actually fit before you rely on the microwave method.

Waiting to Put the Defrosted Turkey in the Oven

Once your turkey is properly thawed using any of the above methods, it should be cooked immediately or as soon as possible, Gravani says. So once you are done adding seasonings and herbs to the raw turkey, try to get it in the oven.

This minimizes the amount of time the turkey is sitting at room temperature in the danger zone, when bacteria can grow and multiply rapidly, Ford says.

Stuffing the Turkey With the Stuffing

“We recommend putting the stuffing in a casserole dish ... which makes it easier to ensure that the stuffing is thoroughly cooked,” says Ford, adding that a food thermometer should be inserted into the center to make sure it reaches 165 degrees Fahrenheit.

“You can you can still have the same great flavor and everything, but it’s much safer,” says Gravani.

"We can't just look at the color of a product or the texture of a product to determine doneness," says Gravani, adding that turkeys are much larger which makes it more difficult to determine if the entire thing is cooked thoroughly or not.

"A food thermometer is the best way to tell whether that product is done and whether those organisms are killed," says Gravani. All poultry should be cooked to an internal temperature of 165 degrees Fahrenheit at the thickest part of the bird, Gravani adds, so people can stick the probe through the breast or under the wing until it reaches the center.

Letting Cooked Food Sit Out for Over Two Hours

It's fairly common to serve Thanksgiving food buffet-style, and having it sit out while people enjoy their meal and return for seconds or thirds. But cooked or perishable food has about two hours until it needs to be stored and refrigerated, says Gravani.

Bacteria like clostridium perfringens bacteria can produce spores, which grow and multiply rapidly in cooked food left to sit at room temperature or the danger zone (between 40 degrees and 140 degrees Fahrenheit) for longer than two hours, says Ford.

Not Checking Your Refrigerator Temperature

The refrigerator temperature should be set to at least 40 degrees Fahrenheit or lower, says Gravani, which ensures that it will keep everything cold enough and at safe temperatures. This is especially important when the fridge will be stuffed with warm leftovers.

The freezer should be set to zero degrees Fahrenheit or below, says Ford, which will ensure any leftovers are thoroughly frozen.

Instead of putting foil over the turkey or a big dish of stuffing and putting it into the fridge, cut these items up into smaller pieces first and put them in several shallow containers, says Ford.

Dividing and storing your food in smaller containers makes it easier to cool down, says Ford, and it also makes it easier to reheat. All leftovers should be reheated to 165 degrees Fahrenheit and you can use a meat thermometer for accuracy, the experts note.

This story first appeared on TODAY.com. More from TODAY