Fiddleheads is pretty much the definition of a hidden gem when it comes to dining out, and Hancock itself is a bit of a hidden jewel as well

New Hampshire is a beautiful state with a lot to offer visitors and locals alike, but it sometimes gets a bad rap for what is perceived as a lack of the type of quaint town centers that its neighbors seem to have in abundance.

Head west to Vermont and you’ll find such lovely little hamlets as Weston, Newfane, Grafton, Dorset and Plymouth, while driving east into Maine will bring you to old-fashioned villages like Kennebunkport, Bethel, Wiscasset, Rockport and Northeast Harbor. Massachusetts to the south has too many to name, with Concord, Hingham, Stockbridge, Rockport and Marblehead being just a few such spots.

New Hampshire isn’t lacking in communities that look like they belong on calendars, however, as anyone who has been to Jackson, Wolfeboro, Hanover, Exeter or Peterborough can attest, and one of the nicest places of them all is the tiny village of Hancock, an out-of-the-way spot in the Currier and Ives part of southern New Hampshire that has the look of a charming Vermont community but is much, much closer to the Boston area. And unlike some otherwise-beautiful towns in the Green Mountain State that are little more than scenic stops in the road, this town has a restaurant anchoring it—and it’s a good one that also happens to be casual, cheap and completely unpretentious.

Getting to Hancock, while not all that difficult, is a bit of an experience onto itself, as it isn’t one of those places that you drive through to get somewhere else. That's in part because there really isn’t much else nearby, as it is surrounded by some of the most remote lands you’ll find an hour and a half from Boston. 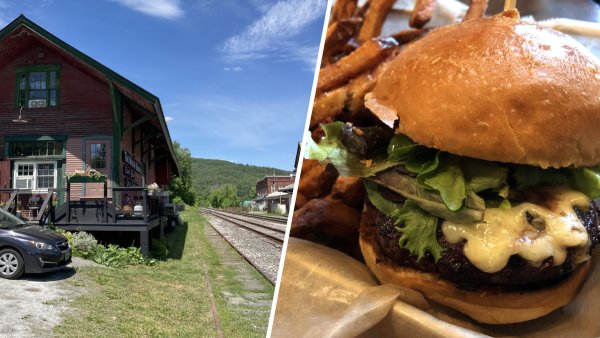 This Burger Joint Scales the Heights of New England Dining With Food, Beers and Scenery

Heading northwest on Route 202 from Peterborough (after taking Route 101A/101 west from Nashua) will quickly bring you into hilly and rugged terrain, but soon after taking a left on Route 123, you’ll start to see signs of civilization. As you approach the center of Hancock, you’ll begin to see the type of colonial architecture that you only seem to find in New England, and, combined with ancient streetlights, endless white fences and the smell of woodsmoke in the air, you may feel like you’ve stumbled into a village in Vermont, though you’re still a good 45 minutes east of that state.

The main drag has everything you would expect from an old-fashioned New England town, including a village green complete with a gazebo in the middle; a church with a white steeple facing the green; inviting buildings that house the library, town offices and historical society; a small independent market; and an old inn and tavern. And right in the middle of it all is a simple-looking dining spot called Fiddleheads, which in some ways seems to be the centerpiece of the community.

Fiddleheads Cafe is easy to miss if you don’t know it is there, as the restaurant resides in an attractive but unassuming house that blends in with the other structures in and around the center of town. The exterior of the place features a wraparound porch that is perfect for outdoor dining on a nice day -- or perhaps even a not-so-nice day, as the entire porch has a roof that protects diners from the elements. A tree-lined driveway to the left has additional seating for when the weather cooperates, and customers who would rather eat indoors can sit in a little dining area mostly to the right once they enter the eatery.

Fiddleheads is a counter-service restaurant, with the ordering area being toward the back beyond the dining area; here you’ll find a display case showing a variety of items available to patrons, including salads and sweet treats, while handwritten menus are displayed behind the counter and show some of the specials of the day.

The menu at Fiddleheads includes everything you’d want from a cafe that caters to visitors and locals alike, and the focus leans toward healthy fare using seasonal and locally sourced ingredients. Hearty breakfasts can be ordered to start the day, with a choice of bacon and eggs, breakfast sandwiches, French toast, waffles, pancakes (including blueberry pancakes), breakfast burritos and omelets, plus some weekend specials, like eggs benedict.

While folks who live in town tend to frequent the place at breakfast time, you’ll tend to find tourists, hikers and other visitors to Hancock arrive at the lunch hour, enjoying some warm and comforting house-made soups such as chicken and rice, carrot and ginger, tomato and potato and leek depending on the day, as well as an array of salad options that include chickpea, Greek, Thai noodle, marinated veggies and pasta, plus one with cranberries, bacon and gorgonzola.

Sandwiches tend to rule the roost at Fiddleheads, and there are simply too many to list (and the options are always changing), but expect fresh ingredients, including some truly delicious breads such as anadama, whole wheat, oatmeal, multigrain, sourdough and rye. A few highlights include an anything-but-basic turkey club with bacon, lettuce and tomato (and real turkey rather than the processed stuff that too many places use); a garlicky hummus sandwich with cucumbers, lettuce, tomato, sprouts, onions, carrots and pickles; a savory turkey bacon melt on oatmeal bread (and why don’t more restaurants do turkey bacon melts, by the way?); messy but delicious Hebrew National dogs with chili; a juicy grass-fed burger on a house-made bun; and a roast beef sandwich that gets an extra kick from horseradish.

If you still have room, some of the desserts include ice cream, apple turnovers, chocolate cake, carrot cake and raspberry strudel, though once again, it depends on the day, as the options are ever-changing. As of this writing, diners can also enjoy an early dinner at Fiddleheads Wednesday through Friday, as closing time is 7 p.m., though weekends are breakfast and lunch only, with the doors shutting at 3 p.m. (The restaurant is currently closed on Mondays and Tuesdays.)

Fiddleheads is pretty much the definition of a hidden gem when it comes to dining out, and Hancock itself is a bit of a hidden jewel as well — and a town that is well worth checking out in the fall when the leaves start to turn in late September and October. Those who love to take mystery rides could have a field day here, with a particularly nice route including Hancock, Harrisville, Dublin, Peterborough and Jeffrey Center, while hikers have some terrific options including Skatutakee and Thumb Mountains only a few minutes away from the center of town, and several of the Monadnocks (Pack, North Pack, Little and Monadnock itself) not too far away.

And Fiddleheads makes for a wonderful little stop while leaf-peeping via car or foot, being the type of dining spot that makes you never want to leave this laid-back, inviting village that helps prove that small-town charm can certainly be found in the Granite State.