'We could save tens of thousands of lives if everyone would just wear a mask for the next few months. Not Democratic or Republican lives, American lives,' Biden said

President-elect Joe Biden on Monday implored Americans to wear masks to slow the spread of the coronavirus, even as he cheered news about the promising development of a vaccine being developed by pharmaceutical giant Pfizer.

Biden in remarks after meeting with his newly formed coronavirus advisory board cautioned that Americans still face “a dark winter” and need to be aggressive about mask wearing and social distancing as infections continue to surge around the country. Though Pfizer announced promising results from a vaccine trial and is on track to file an emergency use application with regulators this month, Biden noted it could be months before a vaccine is widely available.

“We could save tens of thousands of lives if everyone would just wear a mask for the next few months. Not Democratic or Republican lives, American lives,” Biden said. “Please, I implore you, wear a mask.”

President-elect Joe Biden announced a COVID-19 Transition Advisory Board during an address on Monday. He also stressed the need for Americans to wear masks to prevent the spread of the virus.

The Democrat's transition team also unveiled members of Biden's coronavirus working group tasked with developing his administration's pandemic response — something Biden says he wants to put in motion as soon as he takes office in January.

Pfizer, which developed the vaccine with the German drugmaker BioNTech, said it is on track to file an emergency use application with U.S. regulators this month.

How Coronavirus Has Grown in Each State

In the past week, 1 out of every 433 Americans was diagnosed with COVID-19. Hospitals in several states are running out of space and staff, and the death toll is soaring. So far, the U.S. has recorded more than 9.8 million infections and more than 237,000 deaths from COVID-19.

An interim analysis of the Pfizer vaccine, from an independent data monitoring board, looked at 94 infections recorded so far in a study that has enrolled nearly 44,000 people in the U.S. and five other countries.

Pfizer says an early peek at its vaccine data suggests the shots may be 90% effective at preventing COVID-19, indicating the company is on track later this month to file an emergency use application with U.S. regulators.

U.S. pharmaceutical company Pfizer and German biotech firm BioNTech say their coronavirus vaccine is more than 90% effective in preventing COVID-19. In this study, protection from COVID-19 is achieved 28 days after the initial vaccination, which consists of a two-dose schedule.

Trump throughout his campaign said that the nation — even as the infection rate has surged to record highs — was rounding the corner on the coronavirus and that a vaccine was imminent. Vice President Mike Pence was set to hold a meeting of the White House coronavirus task force on Monday. Pence in a tweet called Pfizer's reported progress “HUGE NEWS."

The White House task force, which includes the federal government's leading infectious disease expert Dr. Anthony Fauci, has been diminished in recent months as Trump grew impatient that efforts to slow the virus was having deleterious impact on the economy.

After declaring victory Saturday, Biden quickly pivoted from a bitter campaign battle to reining in the pandemic that has hit the world’s most powerful nation harder than any other.

Biden announced the members of his advisory board will develop a blueprint for fighting the pandemic. It includes doctors and scientists who have served in previous administrations, many of them experts in public health, vaccines and infectious diseases.

Democratic presidential nominee Joe Biden on Monday focused on the coronavirus pandemic, and President Donald Trump's response to it, during a campaign stop in Manitowoc, Wisc.

Notable among the members is Rick Bright, a vaccine expert and former head of the Biomedical Advanced Research and Development Authority. He had filed a whistleblower complaint alleging he was reassigned to a lesser job because he resisted political pressure to allow widespread use of hydroxychloroquine, a malaria drug pushed by Trump as a COVID-19 treatment.

Public health officials warn that the nation is entering the worst stretch yet for COVID-19 as winter sets in and the holiday season approaches, increasing the risk of rapid transmission as Americans travel, shop and celebrate with loved ones. 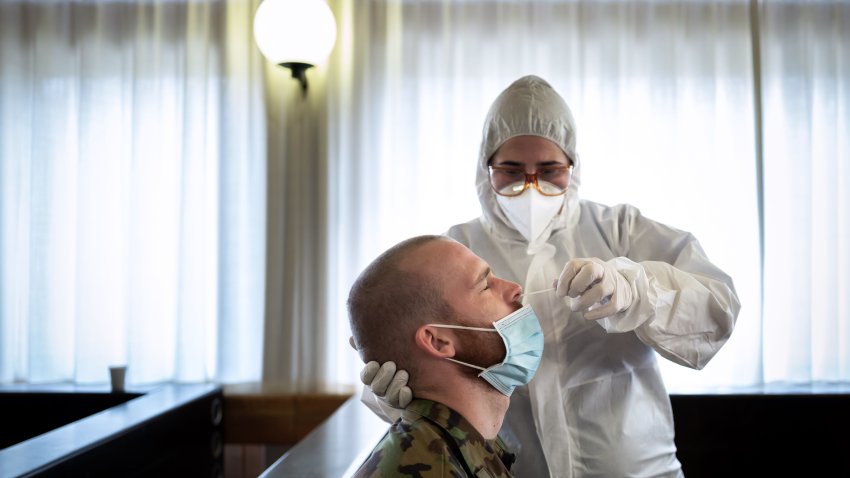 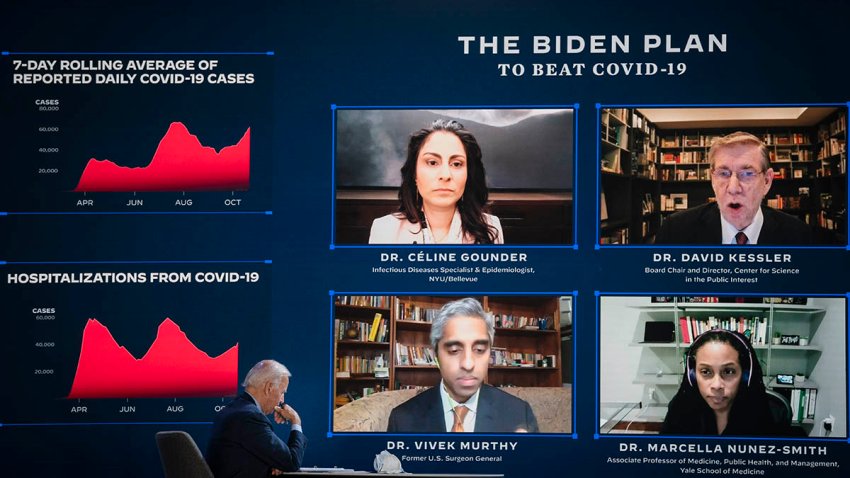 “The next two months are going to be rough, difficult ones,” said Dr. Albert Ko, an infectious disease specialist and department chairman at the Yale School of Public Health. “We could see another 100,000 deaths by January.”

Biden pledged during the campaign to make testing free and widely available; to hire thousands of health workers to help implement contact-tracing programs; and to instruct the Centers for Disease Control and Prevention to provide clear, expert-informed guidelines, among other proposals.

He also made Trump’s mishandling of the pandemic a central focus of his campaign. But much of what Biden has proposed will take congressional action, and he’s certain to face challenges in a closely divided House and Senate.

Establishing some consensus with state leaders on a national response, including a nationwide mask mandate, should be a top priority, she said. Opposition to wearing masks remains a stubborn issue, particularly in some of the hardest-hit states.

“Each state is acting fairly autonomously on their own policies, and we've seen how that's played out," said Ko, the Yale expert. "This disease needs national and global responses.”

Democratic presidential candidate Joe Biden criticized President Donald Trump's handling of the coronavirus pandemic during a speech in Pennsylvania on Wednesday. "Instead of leading the charge to defeat the virus [Trump] just basically waved a white flag and has retreated," Biden said.

During his first remarks as president-elect, Biden said Saturday that his COVID-19 task force will create a plan “built on bedrock science” and “constructed out of compassion, empathy and concern.”

There’s also hope in the wider medical community that a Biden presidency will help restore U.S. leadership on global public health challenges, including the development and distribution of a vaccine when it becomes available.

Dr. Soumya Swaminathan, the chief scientist of the World Health Organization, said she was more optimistic that a Biden administration would join Covax, a WHO-led project aimed to help deploy vaccines to the neediest people worldwide, whether they live in rich or poor countries.

“Everyone recognizes that for a pandemic, you cannot have a country-by-country approach. You need a global approach,” Swaminathan said.

But in Kansas, one of the states seeing a significant surge in virus cases in recent weeks, at least one hospital official remains skeptical about what a new president can do to turn the tide of the pandemic in the U.S.

“I think the damage is done,” said Kris Mathews, the administrator of Decatur Health, a small hospital in the rural northwest part of the state. “People have made up their minds about how they react to it.”

Associated Press writers Heather Hollingsworth in Kansas, Alexandra Jaffe and Thomas Strong in Washington and Jamey Keaten in Geneva contributed to this story.