Trevor Bickford, a 19-year-old from Maine, has been charged with attempted murder of a police officer and other crimes in the harrowing New Year's Eve machete attack near Times Square

The 19-year-old Maine man charged with trying to murder NYPD officers in a New Year's Eve machete attack near Times Square shortly before the iconic ball drop was remanded to Department of Correction custody following his video arraignment from a hospital on Wednesday.

Trevor Bickford, whom senior law enforcement officials have described as a "homegrown violent extremist," is accused of swinging a large knife at three different cops he approached on Eighth Avenue, between 51st and 52nd streets, just after 10 p.m. on New Year's Eve, a night when midtown streets are jam-packed with tourists and holiday revelers.

Bickford was shot in the shoulder amid the chaos that ensued.

Defense attorneys requested that he be released on his own recognizance, saying police questioned him for days without a lawyer present and pointing to his lack of criminal history. Counsel also referenced the Wells man's community ties and said he worked at a golf course. The judge, however, agreed with the prosecution in this case.

According to Lisa Nicholas, assistant district attorney, Bickford allegedly made statements implicating himself in the attack and said he indicated that he intentionally waited until the moment when an officer was isolated, away from civilians, to attack. After he allegedly dropped the knife, Nicholas said Bickford indicated he wanted to grab another officer's gun to kill other people but couldn't get the weapon out of the holster.

Nicholas also argued that he poses a "significant flight risk," telling the court Bickford indicated he intended to travel across the United States after leaving New York City and had bought an Amtrak ticket to Miami.

A Maine teen is facing charges for allegedly attacking police officers in New York City with a machete.

Nicholas said Bickford at first indicated he wanted to travel internationally but decided instead to come to New York to carry out "jihad." She said he traveled to New York by way of Boston roughly three or four days ago.

He also allegedly said he considered all government officials targets because they couldn't be proper Muslims given the United States government's support of Israel.

"He stated he specifically targeted the uniformed police officer because an officer is a man in uniform with a weapon and often in the military are targets for the defendant," Nicholas added as she formally requested remand.

The judge ordered another court hearing for the end of the week.

Senior officials briefed on the attack described Bickford earlier this week as a "homegrown violent extremist motivated in part by Salafi-extremism." They said that after his arrest, he said he was self-radicalized and that he had converted his beliefs about three or four months ago, officials said.

Bickford only recently considered New York as a target, officials allege, and decided to go forward with the attack once he got to the city after taking an Amtrak train from Boston on Dec. 29, according to law enforcement officials. He stayed at a hotel on the Bowery, senior police officials said, and may have spent time before the attack in Queens.

Investigators found some of his belongings in Forest Park Monday morning.

All three officers Bickford is accused of attacking were released from the hospital the following morning.

NYPD Commissioner Keechant Sewell has said two of the cops suffered blows to the head. An eight-year veteran suffered a head laceration and a recent police academy graduate endured a skull fracture, she said.

Investigators have said they believe Bickford acted alone. They planned to search for more evidence at his Maine home. Neighbors who knew the suspect and his family told NBC Boston said they were surprised by the allegations.

The FBI's Joint Terrorism Task Force is assisting in the investigation.

This incident follows other lone-wolf terror-type attacks on NYPD officers. In 2014, a radicalized man attacked three officers with a hatchet without warning in Queens. And two years ago, a man stabbed a Brooklyn officer in the neck before stealing his gun and using it to fire at responding officers in another jihadist-inspired lone-wolf attack.

Since 9/11, there have been at least 10 terror-type attacks targeting uniformed officers with knives.

Mayor Eric Adams commended the work of the officers and the police department's security planning that went into securing the area around Times Square in the aftermath of the attack. 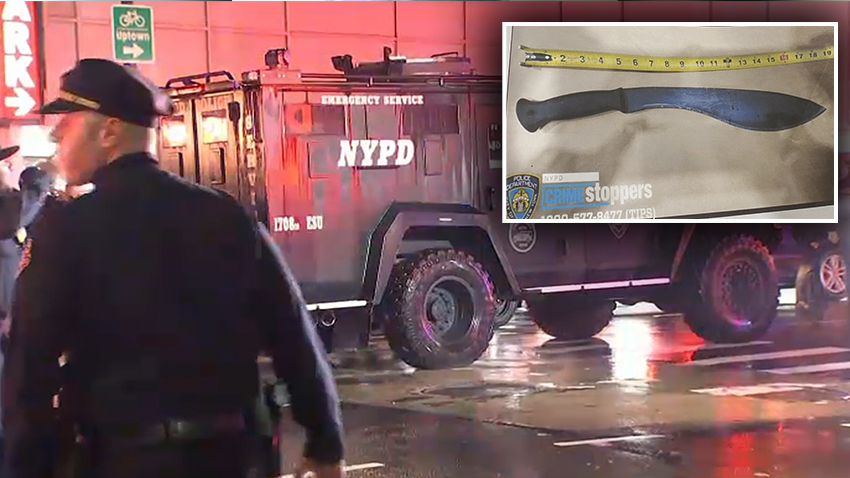