The South Carolina Supreme Court on Friday temporarily suspended the law license of an attorney who was a college friend of Alex Murdaugh and has been sued over his work on the disputed estate of Murdaugh's housekeeper.

A different lawsuit said Cory Fleming didn't reveal his ties when Murdaugh recommended him to represent a man on board a boat that authorities said one of Murdaugh's sons was driving when it crashed and killed a teen. At the time, investigators weren't sure who was driving the boat.

The interim suspension of Fleming's ability to practice law came in a one-page order with no additional details.

The justices typically file a temporary suspension as the state Office of Disciplinary Counsel investigates accusations of misconduct.

In Fleming's case, the sons of Murdaugh housekeeper Gloria Satterfield said in their lawsuit that Murdaugh asked them at their mother's funeral if they would let Fleming be the executor of their mother's estate, saying it would be easier to get insurance settlements.

Murdaugh didn't tell them Fleming was a longtime friend, old college roommate and godfather to at least one of Murdaugh’s sons. 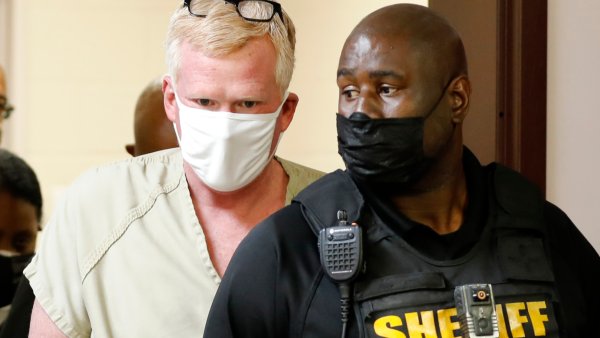 About $5 million in settlements were arranged with Murdaugh's insurers, but the sons never saw a dime of the money, a lawsuit said. Other documents filed in the case suggest Murdaugh opened a bank account with a name similar to a company that helps with legal settlements and diverted the money to his own use.

Fleming is helping the lawyers for the sons and has promised to give back all the legal fees charged to Satterfield’s estate, saying he only charged them half the normal fee. Fleming is adding an unspecified settlement from the lawyer’s malpractice insurance, according to a joint statement by Fleming and Satterfield’s lawyers

Fleming said he made “material mistakes” while running Satterfield's estate and apologized to the sons, according to the statement.

“Mr. Fleming maintains he was not a willing participant in Mr. Murdaugh’s scheme but was used. Mr. Fleming states he would never knowingly jeopardize client funds or put a personal or professional relationship above his professional responsibilities,” the statement said.

Satterfield's sons said Murdaugh told them their mother died in a fall at the family home. But the Hampton County coroner said she was never notified of the death. State police are investigating how Satterfield died and also the handling of her estate.

In the 2019 boat crash case, Connor Cook said Murdaugh approached Cook in the hallway of a hospital as he headed to get his jaw X-rayed and told him everything would be alright if he would “keep his mouth shut” and hired Fleming as his lawyer, according to Cook’s lawsuit.

Investigators were trying to figure out whether Cook or Murdaugh's son Paul was driving the boat. Murdaugh didn't reveal his relationship with Fleming, Cook's lawsuit said.

Fleming told Cook not to talk to investigators and that set him up to be falsely identified as the driver of the boat, the suit said.

It was not until Cook hired a new lawyer and spoke to prosecutors that Paul Murdaugh was charged with boating under the influence causing death.

That charge was pending when Paul Murdaugh, 22, and his mother, Maggie, 52,were found dead by Murdaughin June, shot to death outside their home. No one has been charged in the killings and state police have said littleabout their investigation.

Alex Murdaugh is in out-of-state drug rehab after being charged with insurance fraud and filing a false police report after he said someone shot at him on a lonely road last month. Investigators said he arranged the shooting so his surviving son could collect a $10 million life insurance policy and that Murdaugh was grazed by the bullet intended to kill him.