The return to work, school and the regular routine in the New Year across New England has been heralded by quiet weather making both commutes easy.

Pleasant air with high temperatures in the 40s regionwide is also making re-entry easier, though a brisk breeze – not exceptionally strong – is sufficient to make for a wind chill value around 40° at the warmest time of the day.  Wispy clouds will dim the sun at times in the morning, then return again later in the day and thicken overnight ahead of moisture pluming north out of the Gulf of Mexico that will race north across the Eastern United States and arrive to the South Coast before dawn Friday.

In fact, most of Southern New England is likely to see at least some rain showers Friday morning into midday, but with temperatures above freezing and recovering to the 40s Friday, all plain rain is expected.

Windy Wednesday Could Mean Power Outages for Some 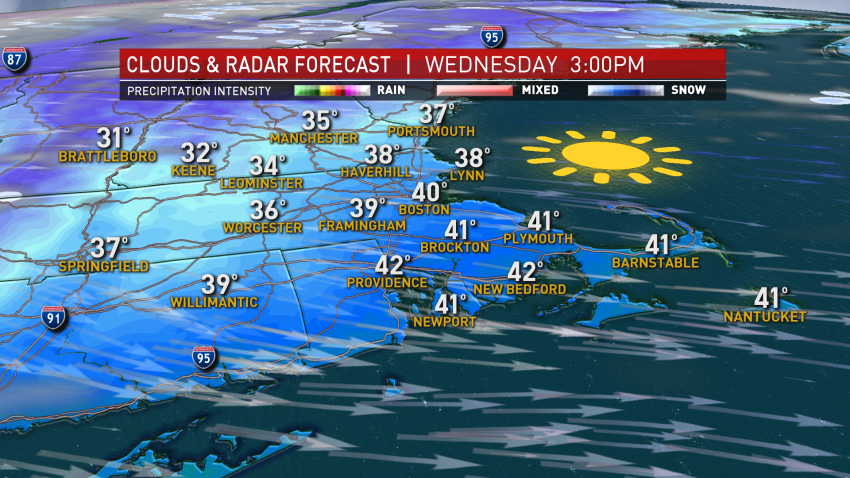 Northern New England stays dry Friday morning, though some border sprinkles and flurries are possible later in the day with a separate disturbance zipping through Canada, and Southern New England will dry out under cloudy skies by Friday afternoon through the evening.

It’s early for storm snow totals, but our exclusive NBC10/NECN Forecast System is predicting a coating to an inch north of the MA Turnpike, with closer to three or four inches in a lot of Northern New England, and we think that’s a good early estimate for now.  Drying is likely as the day progresses Sunday, with the next chance of snow or rain next Tuesday night through Wednesday in our exclusive First Alert 10-day forecast, then a chance of what would probably be mostly rain at the start of next weekend.