While millions have adopted remote work routines during the pandemic, six authorities in health and medicine who spoke with NBC10 believe the medical director’s physical absence during a public health emergency could hamper her effectiveness

With the coronavirus pandemic continuing to grip the city, a senior leader at the Boston Public Health Commission is carrying out her duties remotely from more than 5,000 miles away.

The NBC10 Investigators have learned the commission’s medical director, Dr. Jennifer Lo, relocated with her family to Hawaii in November 2020.

Lo remained in her position at BPHC, and has worked remotely over the winter, advising the commission during a wave of new COVID-19 infections over the holidays, and the launch this month of Boston’s first mass vaccination clinic at the Reggie Lewis Track and Athletic Center in Roxbury.

While millions have adopted remote work routines during the pandemic, six authorities in health and medicine who spoke with NBC10 believe the medical director’s physical absence during a public health emergency could hamper her effectiveness.

Atyia Martin, a former director of disaster preparedness for the health commission, said she was shocked to learn city officials authorized the medical director to work from five time zones away, given the urgency of the pandemic.

Martin, a member of the Black Boston COVID-19 Coalition, has advocated for more testing in the city, and for equity to be prioritized in the rollout of coronavirus vaccines.

“We are in what amounts to the Super Bowl of emergencies,” she said. “It’s hard to imagine that key members of the team aren’t there in the game physically to play.”

More on COVID in Boston 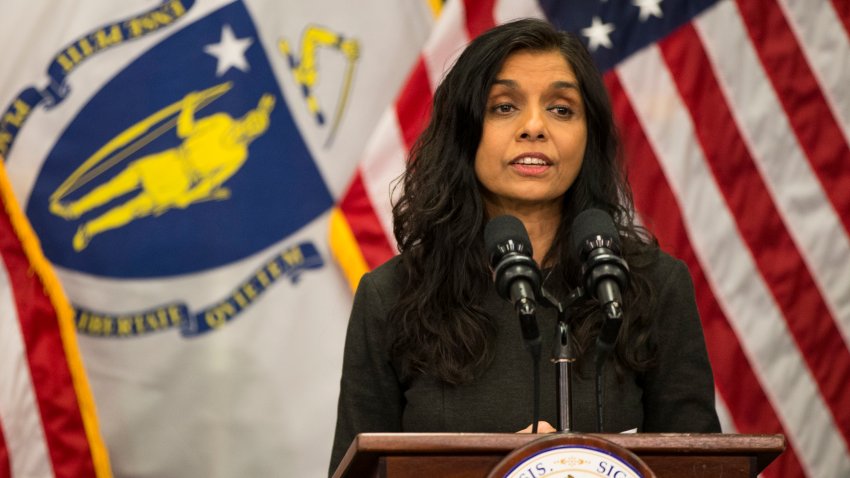 The medical director reports directly to the executive director, and is a member of BPHC’s senior leadership team.

Her duties include ensuring staff communicate about issues such as clinical practice, policy development and new initiatives, according to a previous job posting.

Lo also advises the commission on medical policy issues, oversees the quality of clinical programs and serves as a liaison to hospitals, public health schools, medical institutions and institutional review boards, according to the job posting.

Lo was hired for the position in April 2018. She previously served as medical director at the Greater Roslindale Medical and Dental Center, and as family team medical director at Boston Health Care for the Homeless Programs, according to an announcement released by the city at the time.

In an email statement, Lo told NBC10 she and her husband made the difficult decision to temporarily relocate to Hawaii for personal reasons, including to be closer to family.

“As a physician and public health professional, I have been on the front line and deeply involved in Boston’s efforts to control the pandemic within our community,” the statement reads. “For personal reasons, including to support both sets of our aging parents, my husband and I had to make the difficult decision to temporarily relocate our family in November 2020 to be closer to them.

“In conjunction with the move, I offered to resign my position as Medical Director and return to the private sector as a practicing physician,” the statement continues. “However, BPHC determined I would be able to effectively continue my work remotely while maintaining the same level of responsibilities required in this role.”

Lo added she intends to return to Massachusetts this summer, saying she values BPHC as an organization and employer, and is proud of its efforts during the pandemic, and of its push to combat racism and other forms of oppression.

“The work we have done for the City over the last year relative to the COVID-19 pandemic has been difficult and extremely taxing – but also highly rewarding to work with such a dedicated team on such a critical issue,” Lo said.

Lo continues to work four days a week for the city, the same schedule she held before her move, and she’s expected to be available from at least 9 a.m. to 5 p.m. Eastern Time on those days, according to the commission’s interim executive director, Rita Nieves.

In an interview, Nieves defended her decision to authorize the remote work arrangement, saying Lo can fulfill her duties from any location, and that she discussed the decision with other city leaders before approving it.

Nieves added that filling the job hasn’t been easy. It took the commission about one year to find a qualified candidate for medical director last time the job was available, she said.

The job requires a license to practice medicine, and also an advanced degree in either public administration or public health, with special expertise in areas such as health equity, clinical quality improvement, primary care and health care financing.

“I had to choose between that and not having a medical director,” Nieves said, referring to the director’s move to Hawaii. “And at this point in the pandemic response, to me, that was unacceptable.”

Nieves said she isn't aware of any other BPHC employees who are working remotely outside of New England.

Manny Lopes, who chairs Boston’s Board of Health, praised Lo’s job performance while working outside the state.

“Although I am not involved in any staffing decisions as part of my role as chair of the Boston Public Health Commission, I was aware that Dr. Lo had a family situation in Hawaii,” reads a statement he provided to NBC10. “Dr. Lo has been able to do her job remotely and has performed as well as she always has to meet the needs of the Boston community. We are grateful to her for her continued efforts to protect, preserve, and promote the health and well-being of Boston residents.”

“In the middle of an epidemic, a plague, you want to make sure your leadership is really there working on the front lines,” he said, “not thousands of miles away.”

“Part of the role of leadership is to let folks know that I’m in it with you,” she said. “And it communicates something different when it’s remote. Regardless of intention.”