Two people driving in a pickup truck escaped serious injury this weekend in Colchester, Vermont, after they drove on the frozen surface of Lake Champlain's Mallets Bay Sunday night and broke through the ice, sinking into the water below.

The two people in the truck made it to shore, police said, and were brought to the hospital to be evaluated for minor injuries related to the frigid cold.

The case now has public safety officials urging people to be more aware of how thick ice is before they venture onto it.

“There’s no reason to chance it,” said Sgt. Francis Gonyaw of the Colchester Police Department.

Ice flew into the windshield of a car driving in New Hampshire.

Gonyaw urged people to pay attention to weather patterns, know the area they’re exploring and check out the ice conditions in daylight — not darkness, like the 8 p.m. drive Sunday night that ended in the break in the ice on Malletts Bay.

“We don’t want to be the individual — the officer — that goes to your loved one, your family, and tells them that something’s happened to you,” Gonyaw said.

A webcam from Champlain Marina caught a glimpse of the pickup truck driving in circles on the frozen surface of the bay before the ice gave way. Eventually, the video shows, the vehicle’s lights go dark after the truck breaks through the ice and starts sinking into the bay.

“There was a ton of people out here Saturday ice fishing, so that’s probably what made him think it was safe,” ice fisherman Paul Billado speculated Monday. “But once you go out past the inner bay, it’s a different ballgame. A week ago, that was open water.”

Raymond Gingras and a buddy were curious what the scene looked like Monday, so carefully walked out onto the ice to see it.

Gingras took a photo he shared with NECN showing the truck still submerged in the water. It is now encased, because the bay froze over the hole where the vehicle went in.

“It’s probably got a couple inches over the top of the fresh break,” Gingras said, adding that it just hasn’t been cold enough in the area to form the kind of ice that could hold a truck that far from shore. “This is the first cold snap of the season— it’s not a smart idea, honestly.”

If you’re going to go out on the ice, Gonyaw asked that you tell someone where you’re going to be and when you plan to return. He also urged you to bring gear including ice picks that can help you claw your way out if you fall through the ice.

Other public safety experts have recommended that you keep your cellphone in a plastic bag, so it stays dry in case you need to call for help.

Gonyaw could not say when the truck will be removed from the water, noting it would be dictated by safety considerations, weather conditions, and the opinions of a specialized recovery crew. 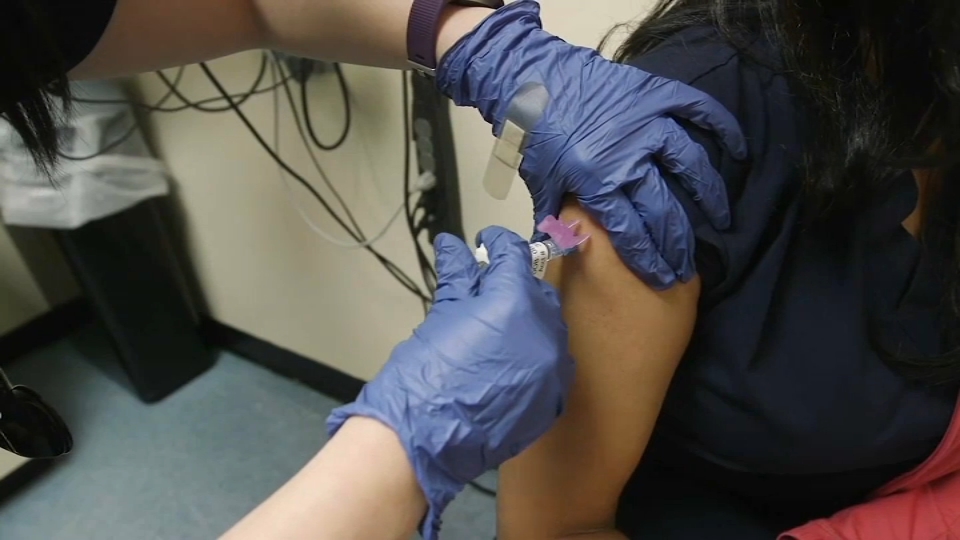