Mikayla's mother, Calvina Strothers, and multiple lawmakers are demanding transparency in the investigation

Hundreds of mourners gathered this week in Hopkinton, Massachusetts to honor Mikayla Miller, the 16-year-old aspiring journalist whose death has prompted calls for police transparency and justice.

The Hopkinton town common was packed Thursday with people who repeatedly chanted Mikayla's name and who were asked to reach out to District Attorney Marian Ryan's office to demand an independent investigation over what Mikayla's mother, Calvina Strothers, and other advocates say were delays in the probe and pushback against the family's search for answers.

Here's where the investigation into Mikayla's death stands.

Mikayla was found dead about 7:45 a.m. on Sunday, April 18. Ryan's office said at the time that the death was not considered suspicious but the case remained "open and active."

She offered details at the news briefing Tuesday based on the preliminary investigation, which has involved dozens of witness interviews, analysis of devices and surveillance video.

It shows that the teenager was involved in a fight between her and two teenagers in a group of four the day before her death, and that someone Mikayla was in a relationship was present for it, according to Ryan. They were at an unsupervised clubhouse in the apartment complex on Revolution Way where the Mikayla lived.

Hours later, Mikayla's mother called police to say that her daughter had been "jumped," Ryan said. The teenager told officers that she'd been pushed and punched in the face, and the officers noted she had a bloodied lip, then interviewed a statement with another girl involved in the fight. They also noted some damage at the apartment complex.

The investigation into whether Miller was assaulted during the fight on Saturday also remains ongoing, Ryan said.

'What I want is for the criminal justice system to work'

"I don't want to be a vigilante in this, I don't want to have to spend all day on the phone getting and passing along evidence … what I want is for the criminal justice system to work," Strothers said.

Calvina Strothers spoke about the loss of her daughter, 16-year-old Mikayla Miller, who was found dead last month, at a vigil and rally in their hometown of Hopkinton, Massachusetts.

At the vigil, she began by speaking about her daughter, with whom she had an "indescribable" bond that took them on cherished trips to Maine and New Hampshire and prompted the teenager to bring her mother chamomile tea every night, even when she didn't ask for it.

"My daughter was bright, funny, loving, caring and loved me to death," Strothers said.

Hundreds gathered in the Hopkinton town common to remember Mikayla Miller, who was found dead in the town, and to hear her mother call for justice.

Mikayla was an aspiring journalist who wanted to attend a historically Black college or university, calm, forthright and gave incredible advice, her mother said.

"She was my bright and shining star in this crazy world," Strothers told the crowd, sometimes overcome by emotion.

Calvina Strothers spoke to a rally of people in Hopkinton, Massachusetts, about the investigation into the death of her daughter.

But she also pushed back on what Ryan has said about the investigation into her daughter's death, which came hours after she was involved in a fight with other teenagers.

"Due to the lack of urgency for some, I've had to not only be the grieving mother but also put pressure on the DA, Marian Ryan, who I did not hear from until 12 days after Mikayla's death," Strothers said.

But Strothers said that she'd found the information on how many steps Mikayla had traveled was impossible to have been pulled from the girl's phone, based on what she'd been told by someone working for its manufacturer. She also said she wants to see a forensic report on the belt found with her daughter's body.

"When they came to my house that morning, without any investigation, they immediately drew a conclusion and said that my daughter took her own life," Strothers told reporters after the rally, adding that if they had waited to draw a conclusion, there wouldn't be the need for a rally.

Elected officials back call for transparency

The rally was peaceful and drew a handful of politicians, including state Senate President Karen Spilka, though the Hopkinton Select Board held a meeting Tuesday night to discuss security for the event, so large that there was expected to be enhanced police presence at Hopkinton schools. Students were dismissed early and afterschool sporting events canceled.

"At this time, we have concerns about volume: there will be great numbers of attendees and exceedingly heavy traffic in the downtown area, perhaps making the area significantly restricted to the flow of traffic, including our buses,” said School Superintendent Carol Cavanaugh ahead of the event. 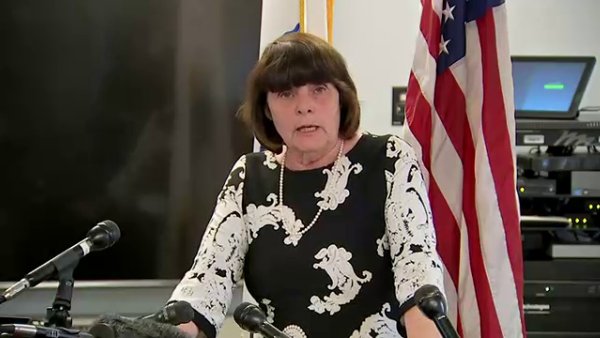