The hours-long visit was the first public one by an Israeli foreign minister to Egypt since 2008, according to the Israeli Embassy in Cairo

Egypt and Israel held high-level talks in both countries Sunday to shore up a fragile truce between Israel and the Hamas militant group and rebuild the Gaza Strip after a punishing 11-day war that left parts of the seaside enclave in ruins.

Egyptian Foreign Minister Sameh Shukry received his Israeli counterpart, Gabi Ashkenazi, in Cairo. The meeting is part of an effort to build on an Israel-Hamas cease-fire reached May 21 and to revive Israeli-Palestinian negotiations, which have been dormant for more than a decade, Shukry's office said. Egypt has not said how it would be able to restart talks.

The hours-long visit was the first public one by an Israeli foreign minister to Egypt since 2008, according to the Israeli Embassy in Cairo.

Spokesman Ahmed Hafez said Shukry called for establishing an atmosphere to relaunch “serious and constructive” negotiations between the two sides. He also urged both sides to refrain from “any measures” that could hamper efforts to revive peace talks.

They also discussed the release of Israeli soldiers and citizens being held by Hamas, Israel's top diplomat said.

On Wednesday President Joe Biden spoke with Israeli Prime Minister Benjamin Netanyahu to urge a de-escalation of the Israeli-Palestinian conflict. NBC News correspondent Raf Sanchez, who has covered the region for years, weighs in and explains the conflict.

"We all need to act to prevent strengthening extremist elements that threaten regional stability, and to ensure the return home of the missing persons and prisoners held by Hamas," Ashkenazi said.

He also criticized the Palestinian Authority over its moves at the International Criminal Court and the U.N. Human Rights Council, saying such activity damages the chances of future cooperation.

Ashkenazi alleged that Palestinian war crimes complaints against Israel —filed over its military conduct since a 2014 war with Hamas and ongoing settlement construction — are an obstacle to political dialogue. The ICC is investigating both Israel and Hamas for possible war crimes. Hamas is under investigation for random rocket fire toward Israeli communities.

Despite cease-fire talks, Hamas and the smaller militant group Islamic Jihad have staged weapons parades in a show of force. On Sunday, thousands attended a Hamas rally in the northern Gaza town of Beit Lahiya, where masked militants displayed rockets, launchers and drones.

As part of the cease-fire efforts, Israeli Prime Minister Benjamin Netanyahu hosted Abbas Kamel, Egypt's intelligence chief, in Jerusalem. Netanyahu said he had raised the issue of returning the remains of soldiers and the two civilians as well as Israeli demands to prevent Hamas from gaining strength or diverting resources meant for the civilian population. 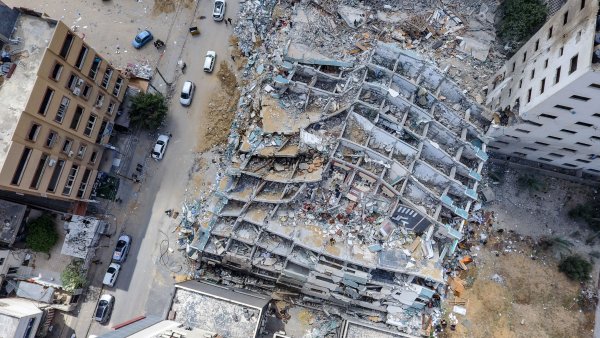 After Another War, Displaced in Gaza Face Familiar Plight 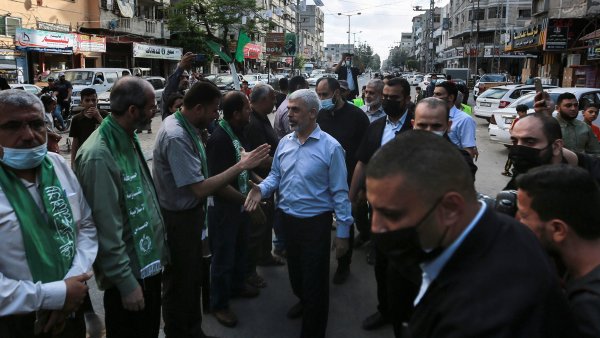 An Egyptian official said Kamel would also meet with Palestinian officials in the West Bank before heading to Gaza for talks with Hamas leaders. The intelligence agency, which is Egypt’s equivalent of the CIA, usually handles Egypt's ties with Hamas and other Palestinian militant groups in Gaza.

It said Cairo would host talks among Palestinian factions to achieve unity between those in Gaza and the Israeli-occupied areas of the West Bank. The report did not provide further details.

During a visit to the region last week, Secretary of State Antony Blinken said he was seeking to bolster Abbas and weaken Hamas as part of the cease-fire efforts.

Hamas seized control of the Gaza Strip from Abbas' forces in 2007, leaving the internationally recognized Palestinian Authority in charge of administering autonomous zones in some 40% of the Israeli-occupied West Bank. Hamas, which refuses to recognize Israel's right to exist, is branded a terrorist group by Israel, the U.S. and other Western countries.

Discussions with Israeli officials have touched on a set of measures that would allow materials, electricity and fuel into the territory, as well as the possible expansion of maritime space allowed for Gaza fishermen, the Egyptian official said.

Fighting between Israel and the militant group Hamas has killed more than 100 people, with the death toll largely among Palestinians, over the past few days, with an exchange of airstrikes and rocket fire escalating to mob violence in the streets. Whether Americans know it or not, our country is already embroiled in this conflict, explains NBC News and MSNBC foreign correspondent Matt Bradley.

“The role of the Palestinian Authority is central in the talks,” he said. “Egypt is seeking to have it deeply involved in the reconstruction process.”

The Egyptian official, who had close knowledge of the proceedings that led to the cease-fire, spoke on condition of anonymity because he wasn’t allowed to brief reporters.

The 11-day war killed more than 250 people, mostly Palestinians, and caused heavy destruction in the impoverished coastal territory. Preliminary estimates have put the damage in the hundreds of millions of dollars. Egypt was key in mediating a deal between the two sides.

The official said Egypt has offered guarantees that rebuilding funds will not find its way to Hamas, possibly going through an international committee led by Egypt or the United Nations that would oversee the spending.

Kamel has also discussed the situation in Jerusalem and ways to ease tensions in the holy city. That would include understandings at the Al-Aqsa Mosque, where Israeli police repeatedly clashed with Palestinian demonstrators, and how to prevent the planned eviction of Palestinian families from the Sheikh Jarrah neighborhood in east Jerusalem, the official said.

Egypt last week invited Israel, Hamas and the Palestinian Authority for separate talks in Cairo to consolidate the Cairo-mediated cease-fire and accelerate the reconstruction process in Gaza.

Hamas leader Ismail Haniyeh is expected to visit Cairo this week, according to the group's spokesman Abdelatif al-Qanou, who also said Hamas is open to discussing a prisoner swap with Israel.

Israel carried out hundreds of air strikes in Gaza on Wednesday morning, as Hamas and other Palestinian militants fired rockets at Tel Aviv and Beer Sheva.
Copyright AP - Associated Press