US Added 431,000 Jobs in March in Sign of Economic Health

The United States has a record 1.7 job openings for every unemployed person, a staffing company CEO says

America’s employers extended a streak of robust hiring in March, adding 431,000 jobs in a sign of the economy’s resilience in the face of a still-destructive pandemic and the highest inflation in 40 years.

Despite the inflation surge, persistent supply bottlenecks, the damaging effects of COVID-19 and now a war in Europe, employers have added at least 400,000 jobs for 11 straight months.

Inflation may be starting to weaken consumer spending, the main driver of the economy. Americans increased their spending by just 0.2% in February, down from a much larger gain in January.

Still, the job market has continued to rebound with unexpected speed from the coronavirus recession. Job openings are at a near-record level, and applications for unemployment benefits have dropped to near their lowest point since 1969.

The still-solid U.S. job market reflects a robust rebound from the brief but devastating coronavirus recession, which wiped out 22 million jobs in March and April 2020 as businesses shut down or cut hours and Americans stayed home to avoid infection.

But the recovery has been swift. Fueled by generous federal aid, savings amassed during the pandemic and ultra-low borrowing rates engineered by the Federal Reserve, U.S. consumers have spent so fast that many factories, warehouses, shipping companies and ports have failed to keep pace with their customer demand. Supply chains have snarled, forcing up prices. 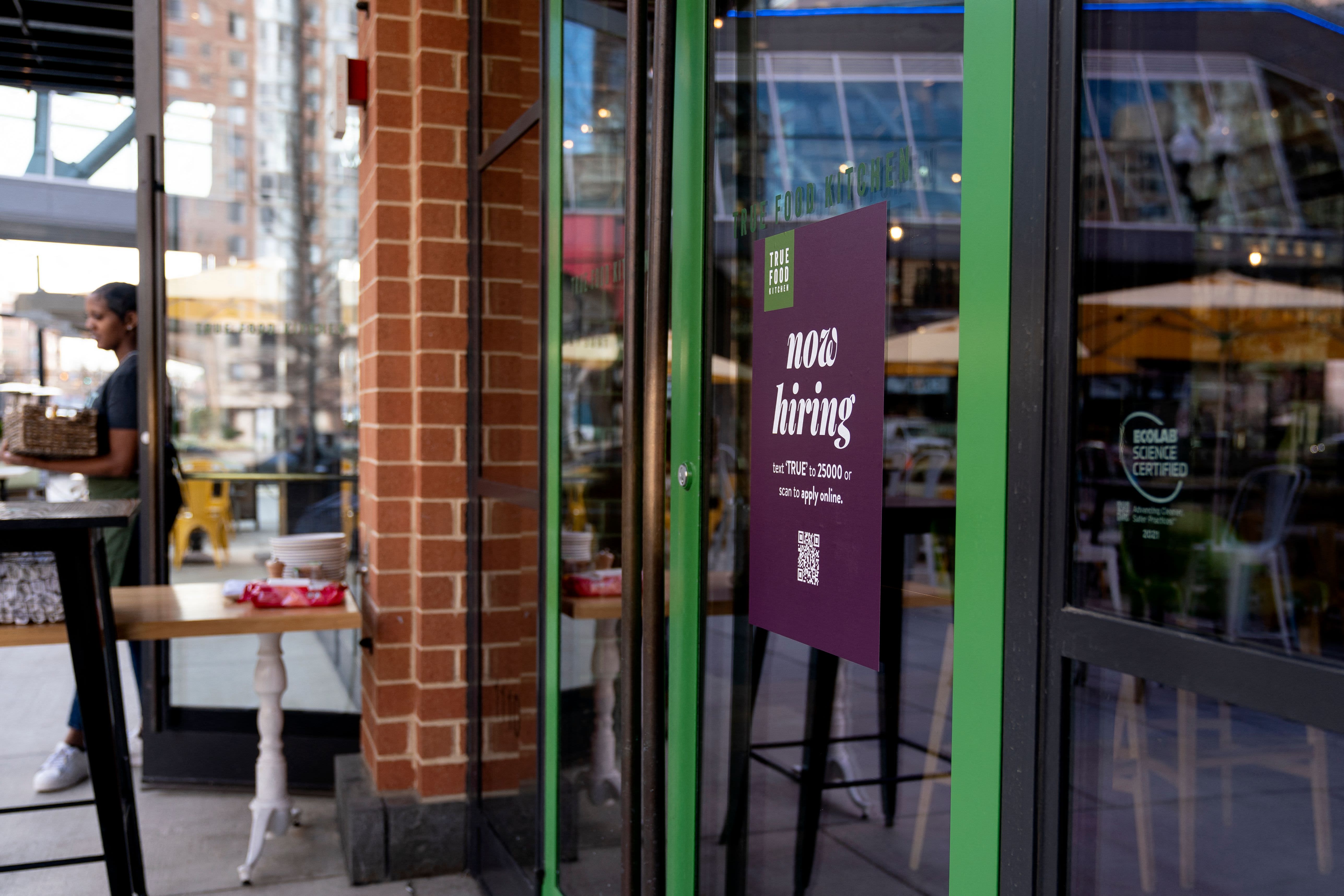 The Great Resignation Is Still in Full Swing. Here's What to Know 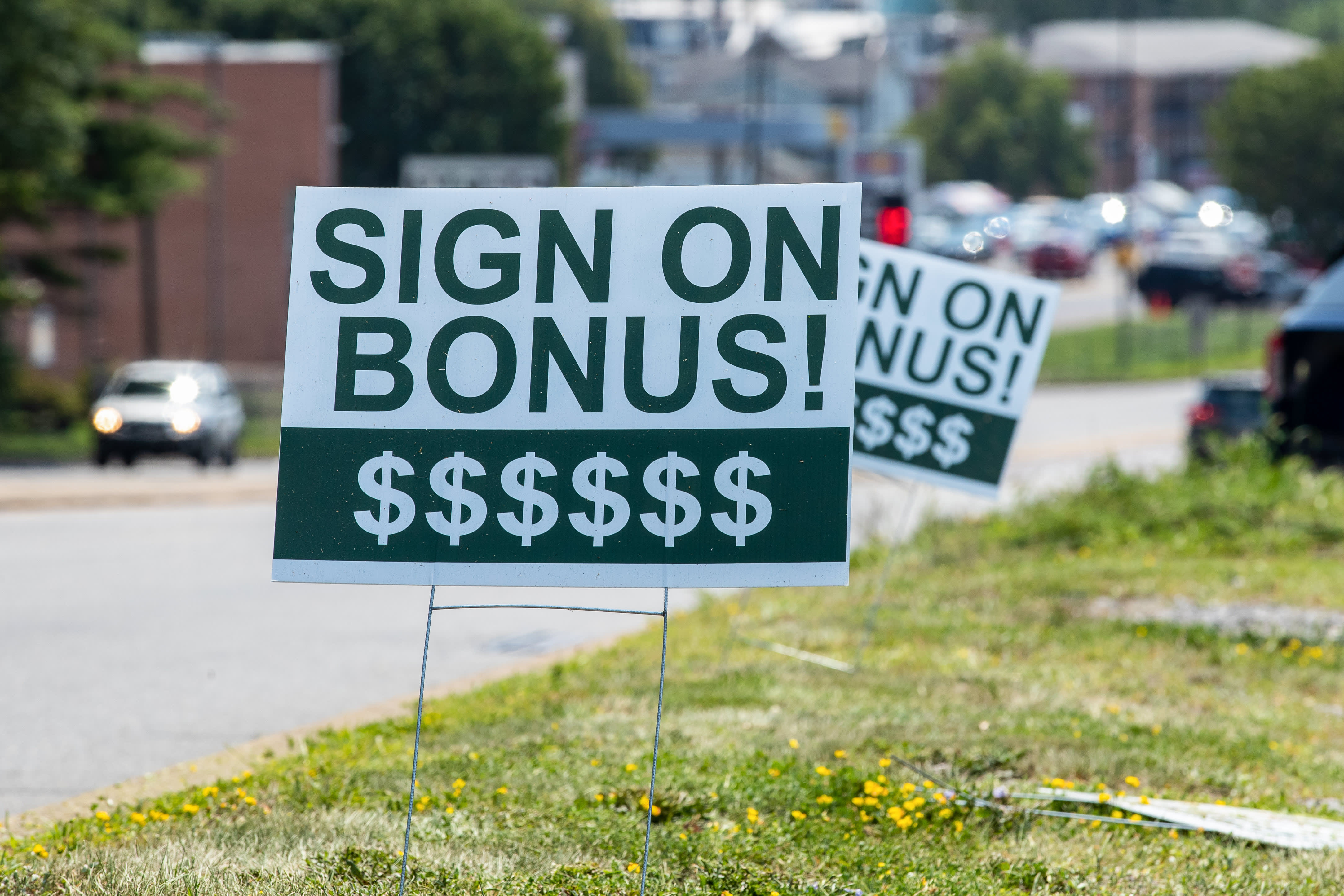 As the pandemic has eased, consumers have been broadening their spending beyond goods to services, such as health care, travel and entertainment, which they had long avoided during the worst of the pandemic. The result: Chronically high inflation is causing hardships for many lower-income households that face sharp price increases for such necessities as food, gasoline and rent.

It’s unclear whether the economy can maintain its momentum of the past year. The government relief checks are gone. The Fed raised its benchmark short-term interest rate two weeks ago and will likely keep raising it well into next year. Those rate hikes will result in more expensive loans for many consumers and businesses.

Inflation has also eroded consumers’ spending power: Hourly pay, adjusted for higher consumer prices, fell 2.6% in February from a year earlier — the 11th straight month in which inflation has outpaced year-over-year wage growth. According to AAA, average gasoline prices, at $4.23 a gallon, are up a dizzying 47% from a year ago.

Squeezed by inflation, some consumers are paring their spending. The Commerce Department reported Thursday that consumer spending rose just 0.2%% in February — and fell 0.4% when adjusted for inflation — down from a 2.7% increase in January.

Still, the job market has kept hurtling ahead. Employers posted a near-record 11.3 million positions in February. Nearly 4.4 million Americans quit their jobs, a sign of confidence that they could find something better.

Even so, so many jobs were lost in 2020 that the economy still remains more than 2 million shy of the number it had just before the pandemic struck. Over the past year, employers have added an average of 556,000 jobs a month. At that pace — no guarantee to continue — the nation would recover all the jobs lost to the pandemic by June. (That still wouldn’t include all the additional hiring that would have been done over the past two years under normal circumstances.)

Brighter job prospects are beginning to draw back into the labor force people who had remained on the sidelines because of health concerns, difficulty finding or affording daycare, generous unemployment benefits that have now expired or other reasons.

Over the past year, 3.6 million people have joined the U.S. labor force, meaning they now either have a job or are looking for one. But their ranks are still nearly 600,000 short of where they stood in February 2020, just before the pandemic slammed into the economy.

You need to write a good resume and network with the right people to get your dream job. In part 3 of our Surviving Capitalism series, we show you how it's done.
Copyright AP - Associated Press