"Every percent of containment is hours and hours of sweat and blood up on those lines," the deputy chief of the state’s fire agency said

Firefighters hard-pressed by some of the largest wildfires in California history scrambled Wednesday to take advantage of cooler weather and an influx of aid as they carved and burned containment lines around the flames.

"Every percent of containment is hours and hours of sweat and blood up on those lines," Jonathan Cox, deputy chief with the state’s fire agency, Cal Fire, said Tuesday evening.

Progress was made on three major blazes around the San Francisco Bay Area and the wine country north of San Francisco and authorities were making plans to allow people who evacuated fire-impacted communities to return to their homes.

The fires, which started as clusters of lightning-sparked blazes last week, slowed down at lower altitudes as a morning marine layer — an air mass drawn from the ocean by intense heat on land — brought cooler temperatures and higher humidity. The cooler air, however, didn’t reach the higher forest and rural areas full of heavy timber and brush.

“The return of the marine layer has been a welcomed one," the National Weather Service said early Wednesday.

Amid the good news there were sobering developments.

The marine layer was expected to spread into the Bay Area and the Santa Clara Valley overnight and the weather pattern was expected to continue through Friday, Cal Fire said.

Another fire in San Mateo and Santa Cruz counties, south of San Francisco, was 19% contained but damage assessments raised the number of buildings destroyed to more than 530.

Santa Cruz County officials reported that a woman who hadn’t been heard from since Monday was found dead at home, apparently due to natural causes. They also were looking for an evacuee missing since he told a friend he wanted to sneak back in.

Residents were urged to be patient by Billy See, the incident commander of that fire.

“When the smoke starts to clear, all the residents get very restless about trying to get back in and wanting to know when the evacuation orders and warnings will be lifted," See said.

With more than 560 wildfires now burning, California fire crews are stretched to their limits.

Authorities were working on a strategic plan for repopulating areas after ensuring that conditions were safe and there that there would be water service and electrical power for residents, he said.

The massive fires — coming much earlier in the season than expected — have pushed firefighters to the breaking point as they dealt with complications from the coronavirus pandemic and a lack of inmate crews who assist firefighters.

Tim Edwards, president of the union representing state firefighters, said 96% of Cal Fire’s resources are committed to fighting the blazes. He was with a three-man fire engine crew that had traveled more than 400 miles (643 kilometers) from Riverside County to help fight the wine country wildfires.

"Between the fires in Southern California and these, they’ve been going nonstop," he said. "Fatigue is really starting to set in, but they’re doing it."

Since Aug. 15, hundreds of fires have burned nearly 2,000 square miles (more than 5,000 square kilometers), an area roughly the size of Delaware.

The blazes have killed at least seven people, burned some 1,300 homes and other buildings, and prompted evacuation orders that still affect about 140,000 people.

James Hagen saw news reports showing his neighbor's home burning after he and his family were forced to evacuate their home in the Santa Cruz Mountains, NBC Bay Area reported. He and everyone else in his neighborhood are still not allowed back, but the video left him wondering what happened to his home.

"That's the worst part of the whole thing is -- not knowing what's happening to your property," Hagen said.

According to NBC Bay Area reporting crews, Hagen's home was destroyed, while another house just a few yards away was spared. Hagen said his family escaped with just a few items. 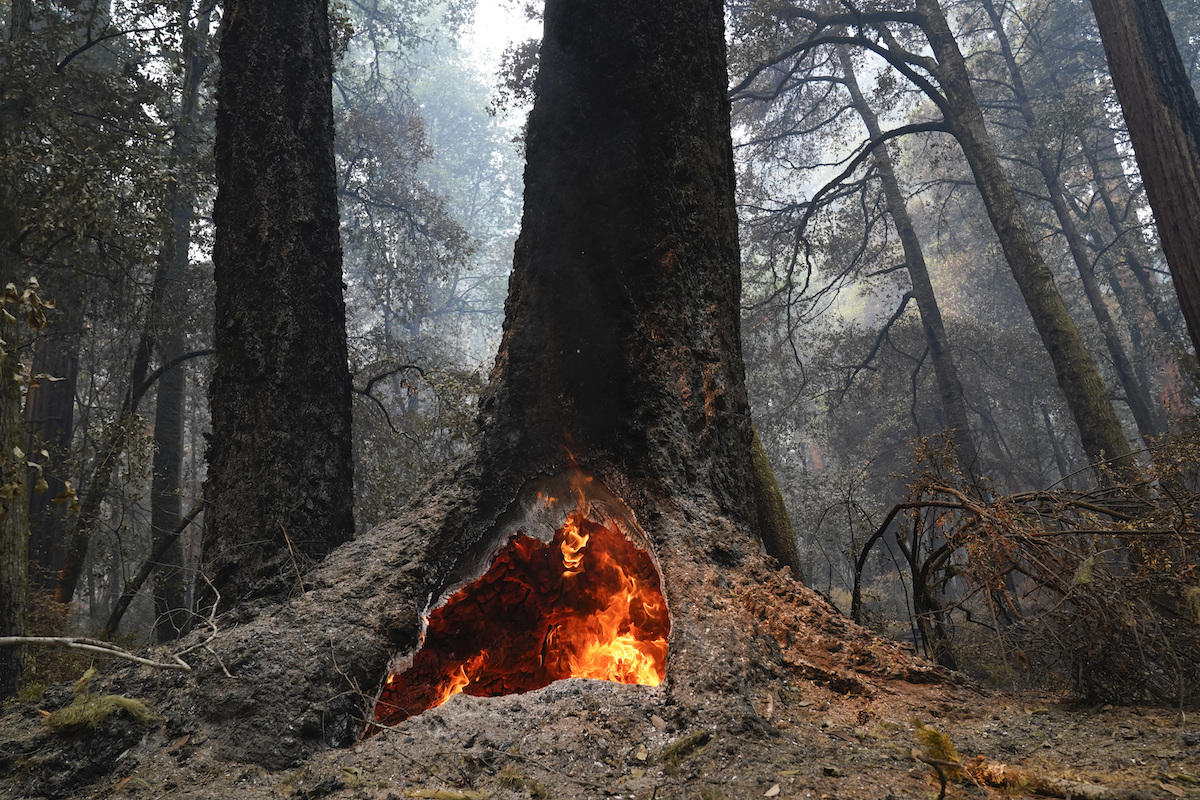 In Vacaville, between San Francisco and Sacramento, 76-year-old Art Thomas said he found only ashes and melted metal at the site of the home he built with his own hands in a rural area where he had lived for 32 years.

"Possessions dating back to when I was a kid were all in the house, everything is gone," Thomas said. "Between sad, crying, laughing — every emotion is there."

He said he had left with his wife, two dogs and a pair of shorts and tennis shoes.

With limited crews to tackle fires on the ground, California has been relying more on bulldozers, aircraft and firefighters from other states and the federal government, said Daniel Berlant, Cal Fire chief of wildfire planning and engineering.

About 300 National Guard troops were finishing firefighter training and were expected to be on the lines Wednesday as another 300 begin four days of training, said spokesman Lt. Col. Jonathan Shiroma.

California has scrambled in recent years to field enough prison fire crews as their numbers dwindled while the state released lower-level inmates. Thousands more were released early as the state responded to the coronavirus pandemic.

A dozen inmate firefighting camps that had been forced to shut down in June for two-week quarantines because of the coronavirus are back in operation but the total of 43 camps are operating at about 40% of capacity, said corrections department spokesman Aaron Francis.

The challenge remains, however, as California heads into the fall. That's when searing weather and dry gusts have historically sparked some of the largest and deadliest fires.