Man Fatally Shot by Police in Worcester; DA Says He Was Armed, Made Bomb Threats

Phet Gouvonvong, 31 of Worcester, appeared to be holding an assault rifle, wearing body armor and a backpack with wires coming out of it on Grafton Street, authorities say

A man who police said made bomb threats was shot and killed by an officer just after midnight in Worcester, Massachusetts, according to authorities.

The officer who shot the man, whose name was withheld, has been placed on administrative leave following department protocol. Local police are asking witnesses who have any video of the incident to contact them.

Phet Gouvonvong, 31, appeared to be "heavily armed," when police found him on Grafton Street, according to Worcester County District Attorney Joseph Early. He was holding what looked like an assault rifle and wearing body armor and a backpack with wires coming out of it. He also had a handgun and multiple rounds of ammunition.

Gouvonvong had called 911 around 10:40 p.m. Tuesday and told dispatchers he was armed with a bomb and threatened to detonate it, Early said. Authorities tracked his location by pinging his cell phone. The Worcester Police Department SWAT team was also on scene.

The dispatcher spent about 30 minutes negotiating with Gouvonvong over the phone, then foreign negotiators did the same on scene, according to officials.

An armed man who made bomb threats was shot and killed by police around midnight in Worcester, Massachusetts, according to authorities.

"While the negotiations were going on, the man appeared to get more and more agitated. He was making furtive movements," Early said. "The negotiations occurred; there were attempts to deescalate. It was very stressful."

Gouvonvong was shot at 12:05 a.m. as a result of those "furtive movements," Early said. He was pronounced dead at the scene.

Early also said it didn't appear Gouvonvong fired any of the weapons he had.

Officials emphasized that the investigation is early and ongoing. Police had just entered Gouvonvong's apartment in Worcester after getting a search warrant when officials gave a second update at 11 a.m. Wednesday. Early initially spoke about the shooting about 5:30 a.m.

"We were in very close proximity with the man. There was a lengthy attempt to deescalate the situation, at which point the man advanced towards the police officers," Early said during the first update. "At that point in the negotiation, there was a shooting."

Worcester County District Attorney Joseph Early gave an update after an armed man who made bomb threats was shot and killed by police around midnight in Worcester, Massachusetts Wednesday.

Worcester police withheld the name of the officer who was placed on administrative leave. The name will be released, Worcester police Lt. Sean Murtha said, but he did not specify when. Murtha added that, based on preliminary investigation, officials believe it was just one officer who opened fire.

Witnesses said it was scary -- many people watched the standoff unfold from the street nearby.

Former Minneapolisu00a0Officer Derek Chauvin was convictedu00a0Tuesday of murder and manslaughter for pinningu00a0George Floydu00a0to the pavement with his knee on the Black manu2019s neck in a case that triggered worldwide protests, violence and a furious reexamination of racism and policing in the U.S. 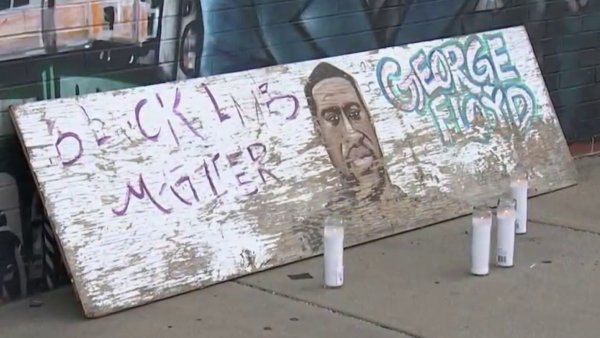