A spokeswoman says Republican Sen. Susan Collins has been cleared to stay in her Maine home while an investigation continues into a suspicious envelope.

Collins' husband, Thomas Daffron, says a threatening letter that claimed to contain the potentially deadly chemical ricin was addressed to him and delivered to their Bangor home.

Daffron said he opened the letter Monday afternoon. In an interview Tuesday, he called the message "nasty," full of complaints about the Republican senator. He stopped reading once he saw the word "ricin."

"[Senator Collins] has been subject to a lot of threats and it's obviously scary," said Daffron. He immediately called police, who responded with a HAZMAT team. Daffron, the family dog and the affected area of the home remained quarantined until police determined it was safe.

The senator's spokesperson, Annie Clark, says this is the latest in a series of threats to Collins. She has been the target of protests in the last several weeks during the contentious confirmation of Supreme Court Justice Brett Kavanaugh.

"If we don't do something to restore civility in this process, it's going to be very difficult for our country to function," said Daffron. "I've never seen anything like this."

The FBI is leading the investigation into the contents and origin of the letter. 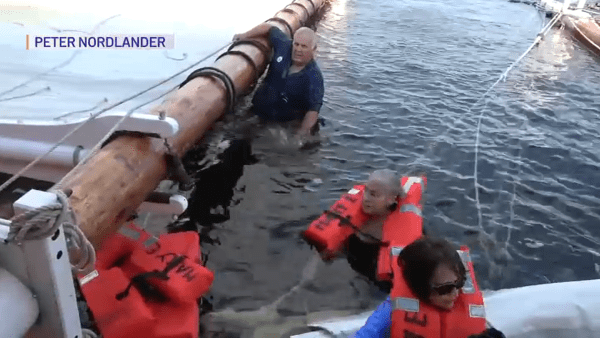 Inside a Historic Schooner's Capsizing in Maine, and the Quick Rescue of 18 on Board

University of Maine Political Science Professor Amy Fried said this level of security concern for a Maine politician may be unprecedented.

"It is unusual in Maine to have that level of incivility and threats," said Fried. "Hopefully people can get through this [political climate] without anyone getting hurt."

"Susan is tough," Daffron said when asked how Collins was doing. "She will be OK. But this is our home."