Biden says the U.S. has outlined for Iran what it's willing to accept in order to rejoin the agreement

U.S. President Joe Biden and Israeli Prime Minister Yair Lapid stood side-by-side Thursday and declared they would not allow Iran to become a nuclear power. They parted ways, though, on how to get there.

Biden, in a joint news conference after a one-on-one meeting with the Israeli leader, said he still wants to give diplomacy a chance. Moments earlier, Lapid insisted that words alone won't thwart Tehran's nuclear ambitions.

While Biden suggested his patience with Iran was running low, he held out hope that Iran can be persuaded to rejoin a dormant deal intended to prevent it from building a nuclear weapon.

“I continue to believe that diplomacy is the best way to achieve this outcome,” Biden said on the second day of a four-day visit to Israel and Saudi Arabia. He also stressed on his first trip to the Middle East as president the importance of furthering ties between Israel and its Arab neighbors. 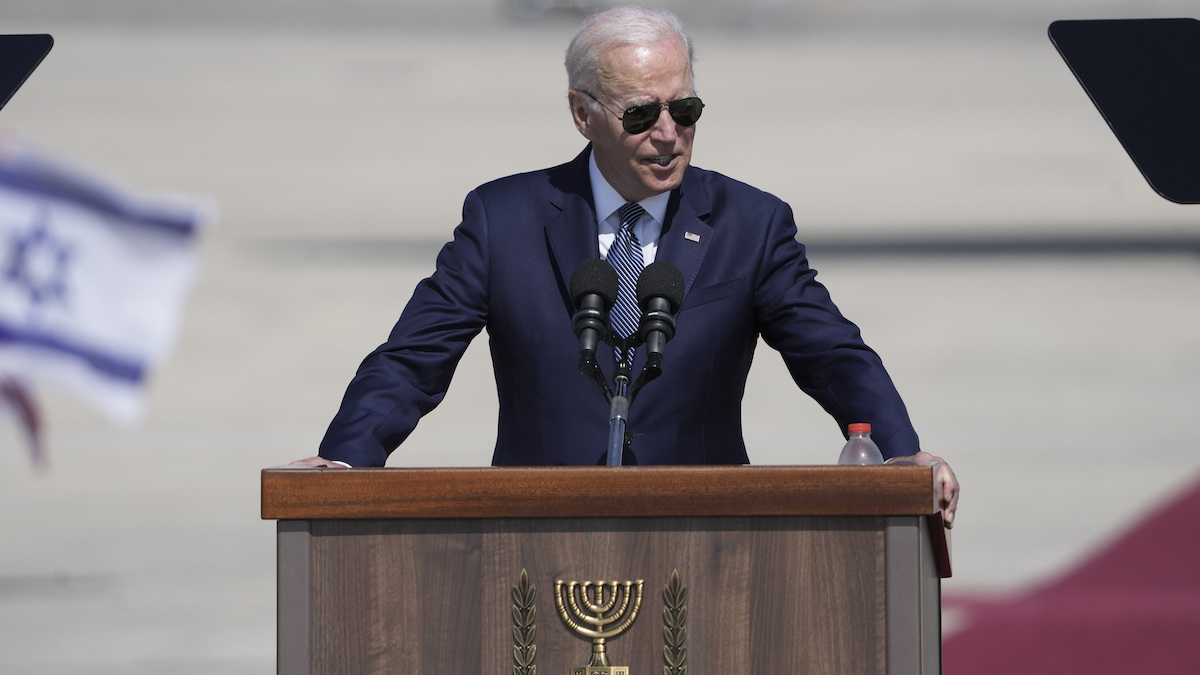 Mexico Agrees to Invest $1.5B in ‘Smart' Border Technology

Hours before Biden was set to become the first U.S. leader to fly directly from Israel to the kingdom, Saudi Arabia’s General Authority of Civil Aviation announced early Friday “the decision to open the Kingdom’s airspace for all air carriers that meet the requirements of the Authority for overflying.”

It signaled the end of its longstanding ban on Israeli airliners overflying its territory — an incremental step toward the normalization of relations between Saudi Arabia and Israel that builds on the strong but informal ties the erstwhile foes have developed in recent years over their shared concerns about Iran’s growing influence in the region.

“President Biden welcomes and commends the historic decision by the leadership of Saudi Arabia to open Saudi airspace to all civilian carriers without discrimination, a decision that includes flights to and from Israel,” U.S. National Security Adviser Jake Sullivan said in a statement early Friday.

Biden’s emphasis on a diplomatic solution on Iran's nuclear program contrasted with Lapid, who said Iran must face a real threat of force before it will agree to give up on its nuclear ambitions.

Lapid suggested he and Biden were in agreement, despite his tougher rhetoric toward Iran.

“I don’t think there’s a light between us,” he said. “We cannot allow Iran to become nuclear.”

Biden, too, said, “We will not, let me say it again, we will not allow Iran to acquire a nuclear weapon.”

Iranian President Ebrahim Raisi lashed out at the U.S. and "its regional allies” for stoking instability in the region, state-run IRNA news agency reported.

“Any mistake by the Americans and their allies in the region and the world will be met with a harsh and regrettable response,” Raisi said.

Biden warned that his patience is wearing thin for Iran to rejoin the nuclear deal, a day after saying he’d be willing to use force against Tehran as a last resort. The president said the U.S. had laid out for the Iranian leadership a path to return to the nuclear deal and was still waiting for a response.

“When that will come, I’m not certain,” Biden said. "But we’re not going to wait forever.”

Resurrecting the Iran nuclear deal brokered by Barack Obama’s administration and abandoned by Donald Trump in 2018 was a key priority for Biden as he entered office. But administration officials have become increasingly pessimistic about the chances of getting Tehran back into compliance.

Israeli officials have sought to use Biden’s first visit to the Middle East as president to underscore that Iran’s nuclear program has progressed too far and encourage the Biden administration to scuttle efforts to revive the deal.

Israel opposed the original nuclear deal because its limitations on Iran’s nuclear enrichment would expire and the agreement didn’t address Iran’s ballistic missile program or military activities in the region.

Instead of the U.S. reentering the deal, Israel would prefer strict sanctions in hopes of leading to a more sweeping accord.

The one-on-one talks between Biden and Lapid marked the centerpiece of a 48-hour visit by Biden aimed at strengthening already tight relations between the U.S and Israel. The leaders issued a joint declaration emphasizing military cooperation and a commitment to keeping Iran from obtaining a nuclear weapon.

In the joint statement, the United States said it is ready to use “all elements of its national power” to prevent Iran from obtaining a nuclear bomb.

Iran announced last week that it has enriched uranium to 60% purity, a technical step away from weapons-grade quality.

The joint declaration could hold important symbolic importance for Biden’s upcoming meeting with Arab leaders in Saudi Arabia as he seeks to strengthen a regionwide alliance against Iran.

The U.S. president, who is set to arrive in Saudi Arabia on Friday, said he also stressed to Lapid the importance of Israel becoming “totally integrated” in the region.

Israel during the Trump administration signed on to the Abraham Accords, declarations of diplomatic and economic normalization signed by Israel, Bahrain, Morocco and the United Arab Emirates that were signature foreign policy achievement for the Republican president. For Israel to come to such an agreement with the Saudis, an economic and Islamic epicenter in the Mideast, would be even more significant.

Lapid asked Biden to deliver a message on behalf of Israel to the Arab leaders he'll meet with in Jeddah, Saudi Arabia: “Our hand is outstretched for peace.”

“Your visit to Saudi Arabia is important for Israel and for the region,” Lapid added. “For our security and for the future prosperity of the Middle East.”

The president will visit Saudi Arabia after calling the kingdom a “pariah” nation as a presidential candidate and releasing a U.S. intelligence finding last year that showed the kingdom's de facto leader, Mohammed bin Salman, likely approved the 2018 killing of of Jamal Khashoggi, a U.S.-based writer.

Biden declined to commit to mentioning Khashoggi's murder when he meets with the crown prince.

“I always bring up human rights,” Biden said at the news conference. “But my position on Khashoggi has been so clear. If anyone doesn’t understand it, in Saudi Arabia or anywhere else, then they haven’t been around for a while.” He did not reiterate his position.

Thursday's appearances with Lapid could provide a boost to Israeli prime minister, who is serving in an interim capacity until elections in November, the fifth in less than four years. His main opponent is former Prime Minister Benjamin Netanyahu, and Lapid's joint appearance with Biden could help burnish his credentials as a statesman and leader. Biden met briefly behind closed doors with Netanyahu, with whom who he’s had a rocky relationship.

Biden didn’t mention Israel's upcoming election during the public portion of Thursday's meeting with Lapid, but told reporters “we had a good beginning of a long, God willing, relationship.”

The president was also honored with Israel's top civilian honor, the Presidential Medal of Honor, from President Isaac Herzog.

Biden finished his day with a stop at Jerusalem's Teddy Stadium to greet U.S. athletes competing in the Maccabiah Games. Also known as the “Jewish Olympics,” it’s the country’s largest sporting event and held every four years for Israeli and Jewish athletes from all over world.