‘My Street Is a River': Heavy Flooding as Hurricane Ian Inundates Southwest Florida

Hurricane Ian made landfall Wednesday in southwest Florida as one of the most powerful storms ever recorded in the U.S., swamping city streets with water and smashing trees along the coast.

The hurricane's center struck Wednesday afternoon near Cayo Costa, a protected barrier island just west of heavily populated Fort Myers. The massive storm was expected to trigger flooding across a wide area of Florida as it crawls northeastward across the peninsula.

At a news conference Wednesday evening, Florida Gov. Ron DeSantis said there were over 1.1 million reported power outages in the state. He added that there were reports of structural damage in Lee and Charlotte counties but said storm surge and flooding was the biggest issue.

"This storm is doing a number on the state of Florida," DeSantis said.

In one area of Naples, vehicles were nearly completely submerged in storm surge from Ian.

Hurricane Ian made landfall Wednesday and Naples has issued a mandatory curfew for all residents. NBC 6's Chris Hush reports.

Mark Pritchett stepped outside his home in Venice around the time the hurricane came ashore about 35 miles to the south. He called it "terrifying."

"I literally couldn’t stand against the wind," Pritchett wrote in a text message shortly after landfall. "Rain shooting like needles. My street is a river. Limbs and trees down. And the worst is yet to come."

The Category 4 storm slammed the coast with 150 mph winds and pushed a wall of storm surge accumulated during its slow march over the Gulf of Mexico. 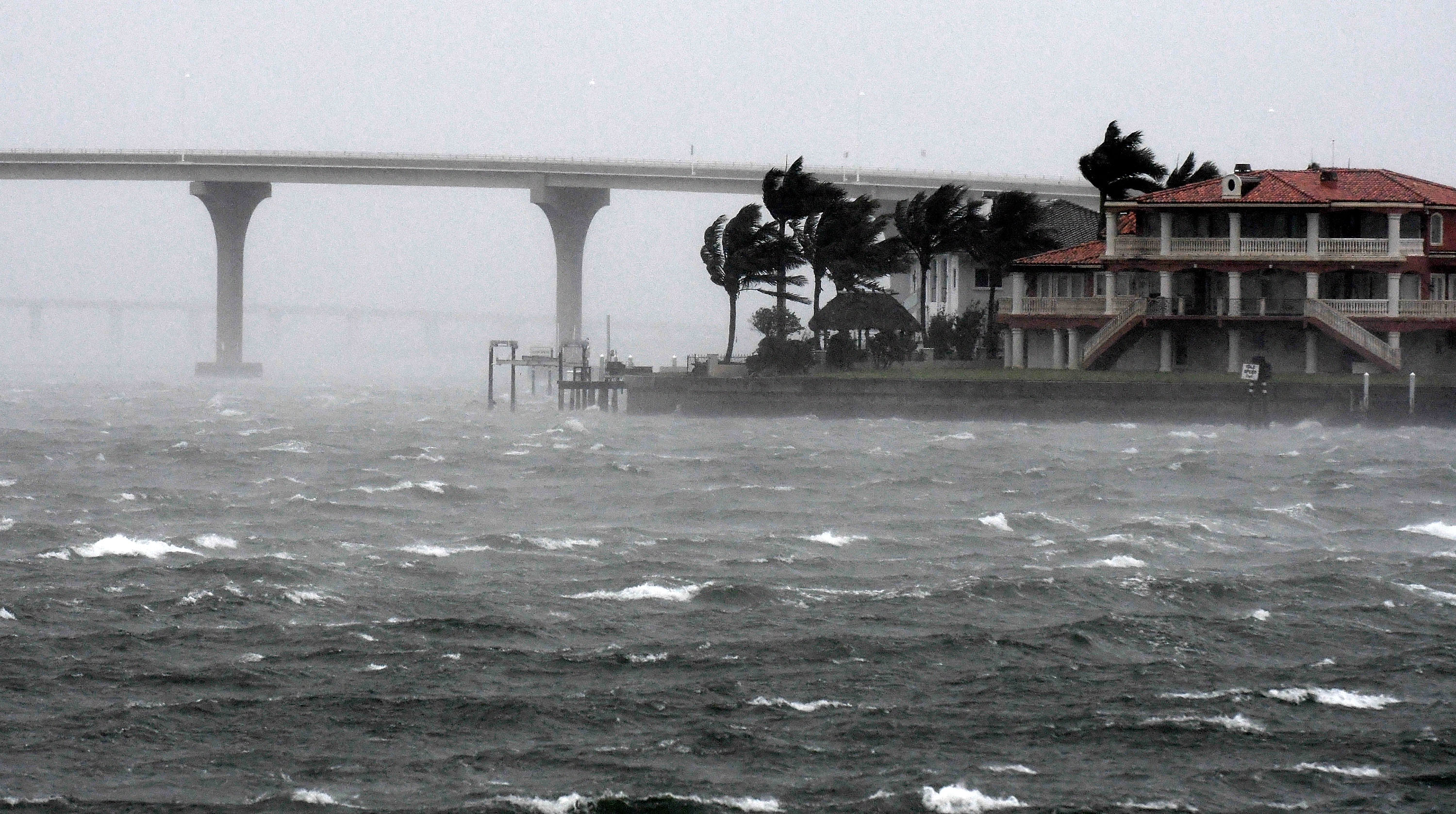 About 2.5 million people were ordered to evacuate southwest Florida before the storm hit. Though expected to weaken as it marched inland at about 9 mph, Ian's hurricane force winds were likely to be felt well into central Florida.

Off the coast on Sanibel Island, just south of where Ian made landfall, traffic cameras hours earlier showed swirling water that flooded streets and was halfway up mailbox posts. Seawater rushed out of Tampa Bay as the storm approached, leaving parts of the muddy bottom exposed, and waves crashed over the end of a wooden pier at Naples.

Ian had strengthened rapidly overnight, prompting Fort Myers handyman Tom Hawver to abandon his plan to weather the hurricane at home and head across the state to Fort Lauderdale.

“We were going to stay and then just decided when we got up, and they said 155 mph winds," Hawver said. "We don’t have a generator. I just don’t see the advantage of sitting there in the dark, in a hot house, watching water come in your house."

DeSantis said residents who didn't evacuate from high-risk areas had already called in for assistance. He said the state has 30,000 linemen, urban search and rescue teams, and 7,000 National Guard troops from Florida and elsewhere ready to help once the weather clears.

"This is going to be a nasty nasty day, two days," DeSantis said at a news conference Wednesday.

Florida residents rushed ahead of the impact to board up their homes, stash precious belongings on upper floors and join long lines of cars leaving the shore.

Some decided to try and ride out the storm. Jared Lewis, a Tampa delivery driver, said his home has withstood hurricanes in the past, though not as powerful as Ian.

Ian made landfall more than 100 miles south of Tampa and St. Petersburg, sparing the densely populated Tampa Bay area from its first direct hit by a major hurricane since 1921. Officials warned residents that Tampa could still experience powerful winds and up to 20 inches of rain.

“Please, please, please be aware that we are not out of danger yet,” Tampa Mayor Jane Castor said in a video on Twitter. “Flooding is still going to occur.”

Ash Dugney warily watched ocean water being sucked out below a Tampa Bay pier Wednesday morning. He said he didn’t trust Tampa’s storm drainage system to keep his corner tuxedo rental business safe from flooding that he said has happened even during mild storms.

“I don’t care about the wind and the rain and the stuff like that, I just care about the flooding,” Dugney said, adding that he moved essentials out of the shop and moved other items up to above waist-high level.

Flash floods were possible across all of Florida. Hazards include the polluted leftovers of Florida’s phosphate fertilizer mining industry, more than 1 billion tons of slightly radioactive waste contained in enormous ponds that could overflow in heavy rains.

Isolated tornadoes spun off the storm well ahead of landfall. One tornado damaged small planes and a hangar at the North Perry Airport, west of Hollywood along the Atlantic coast.

More than 1 million homes and businesses were without electricity, and Florida Power and Light warned those in Ian’s path to brace for days without power.

The federal government sent 300 ambulances with medical teams and was ready to truck in 3.7 million meals and 3.5 million liters of water once the storm passes.

“We’ll be there to help you clean up and rebuild, to help Florida get moving again,” President Joe Biden said Wednesday. “And we’ll be there every step of the way. That’s my absolute commitment to the people of the state of Florida.”

As Hurricane Ian makes landfall in Florida, power outages are expected to grow across the state. The Category 4 hurricane has brought catastrophic winds and flooding to the state.