Braintree's police chief says Kitt will be missed by admirers in and out of uniform.

There was a strong show of support for the Braintree Police Department on Tuesday as they bid farewell to one of their own at a private funeral service at Gillette Stadium.

Kitt, a Braintree police dog who was killed while helping two officers who were also shot during an investigation earlier this month, was honored with a flag-draped coffin.

The service for Kitt, a Belgian malinois, began at 11 a.m., according to Braintree Chief Mark Dubois. Attendance was limited to uniformed public safety personnel and invited guests.

The dog's motorcade worked its way south down Interstates 93 and 95 and finally Route 1 before arriving in Foxboro where hundreds of officers and other fire responders gathered for a final farewell.

“He took a bullet for his partner and paid the ultimate sacrifice," said Diane Andre, who was among those who lined the streets to pay their respects to Kitt. And it is important to be here and respect what he did for 12 years.”

Gary Roden, who also attended procession, added: "I think the K-9 did a lot to protect the two officers and without that K-9, there may have been worse results”

Kitt was shot and killed on June 4 while chasing a domestic violence suspect. The dog diverted the attention of the armed suspect away from his handler, officer William Cushing Jr., and two other officers. Police say Kitt saved their lives.

"As the suspect repeatedly fired his weapon, K-9 Kitt heroically advanced toward the suspect, causing him to turn his attention away from the officers," Police Chief Mark Dubois said in a statement.

A private funeral service will be held at Gillette Stadium Tuesday for Kitt, a Braintree police dog who was killed while helping two officers who were also shot during an investigation earlier this month.

"During this exchange of gunfire, K-9 Kitt, Officer Cushing and Officer Matthew Donoghue each sustained multiple gunshot wounds. K-9 Kitt succumbed to his injuries, valiantly giving has life for the lives of his fellow officers."

The suspect was killed in the confrontation. Cushing and Donoghue have been released from the hospital and are recovering at home. The third officer was not hurt.

The 11-year-old K-9 had been with Braintree police and his partner since 2010. He was recognized a number of times over the years for his work. Four years ago, Kitt was awarded the Police Medal of Valor for protecting several officers during an armed confrontation.

Braintree's police chief says Kitt will be missed by admirers in and out of uniform.

Braintree Deputy Chief Tim Cohoon spoke Saturday about Kitt -- the K9 killed in the line of duty -- and his handler, Officer Bill Cushing. 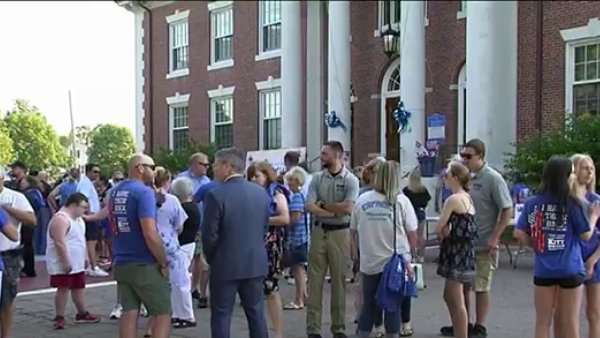 ‘You Went Out a Lion': Tributes Pour in for Mass. Police Dog Killed in Shootout