Brayden Harrington, a 13-year-old from Boscawen, New Hampshire, spoke at the DNC of how presidential nominee Joe Biden, who also worked to overcome a stutter, has helped and inspired him

Near the close of the Democratic National Convention, before Joe Biden accepted his party's nomination in the presidential race, came a moment that transcended politics and touched the hearts of a nation.

Stuttering has been something 13-year-old Brayden Harrington of Boscawen, New Hampshire, has dealt with his entire life. It's also something Biden has worked hard to overcome.

"I'm just a regular kid, and in a short amount of time, Joe Biden made me more confident about something that's bothered me my whole life," Harrington said in a speech Thursday night during the DNC. "It was really amazing to hear someone like me became vice president."

Brayden Harrington, a 13-year-old with a stutter, found a friend in Joe Biden, who also suffers from a stutter. “I’m just a regular kid," he said, "and in a short amount of time, Joe Biden made me more confident about something that’s bothered me my whole life.” Footage provided is a mixed feed and is a joint effort by the pool and the DNCC.

Harrington expressed gratitude to Biden for inspiring him.

"I kind of see him as a role model because he's been going through the same thing as I have," Harrington said in an interview with NBC10 Boston Friday.

The boy met Biden when his dad took him to a campaign event in Concord in February.

More On Brayden Harrington at the DNC 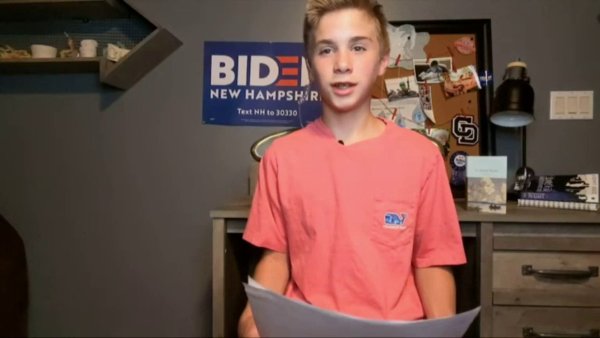 "Hey Brayden, how are you, man?" Biden can be heard asking him in a video from the event.

His dad, Owen Harrington, said to Biden, "We're here because he stutters, he wanted to hear you speak."

"Aw man, come on. I tell you what, don't let it define you," the former vice president told him.

The connection between the two was immediate and powerful.

"He spent a full half hour with him, just talked to him about the various things he does to manage his stuttering and what he did when he was his age, and it was just impressive," Owen Harrington said.

Biden even brought Brayden Harrington on stage at a rally a few days later.

"He showed compassion to me and just wanted me to know that it's going to be OK," Harrington said. "Things will go downhill, of course they will, and then they'll come back right up."

The lesson in perseverance is similar to the ups and downs of Biden's own presidential campaign.

And now, Harrington is determined to pay it forward.

"I want to do the same thing that Joe Biden did to me to younger kids who take having trouble talking as the worst thing in their life, but it's actually a gift," he said. "I would say it's the best moment right now in my life."

Biden has also said he's proud to be a part of Harrington's story.