Most Mainers were excited to see sledding hills and rail jumps coated with snow again, after a month of dealing with grass in January

The Groundhog Day portion of the nor’easter that hit Maine brought snow, sleet and a watery mess to some parts of the state.

Schools opted to either close or switch to remote learning. Gov. Janet Mills closed state offices and a number of other town offices and city halls closed across the state as well.

MaineHealth had canceled COVID-19 vaccine appointments at five clinics on Tuesday because of the storm. Another major health provider in the state, Northern Light Health, was going to go forward with all vaccine clinics and reschedule anyone who could not safely reach a vaccine site due to inclement weather.

By midday Tuesday, snow had switched over to sleet in Portland as high tide in Saco’s Camp Ellis neighborhood had flooded roadways in some areas.

While that was one of the more serious impacts of the nor’easter, most Mainers were excited to see sledding hills and rail jumps coated with snow again, after a month of dealing with grass in January.

“It’s absolutely beautiful today, we can finally get out to the park and shred,” said Sam Molloy, a Portland resident who was snowboarding in Payson Park near Back Cove.

Other Portlanders chose to cross-country ski or bike nearby.

“I don’t see a reason to have winter without snow,” said Henry Griffin, one of the skiers making use of the Back Cove Trail.

As of roughly 4:15 p.m., towns like Kittery, Turner and Brownfield had received a foot of snow or more, while Portland had recorded 7.4 inches of snow. 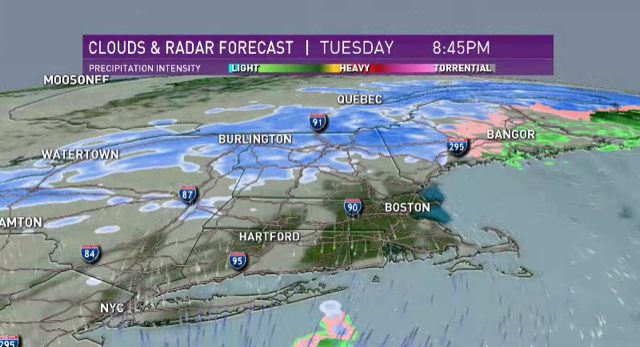