A cold front crosses from west to east Monday with downpours likely through midday.

We woke up Sunday morning with more than shivering cold in New England where many temperatures were in the teens and 20s.

But some of us also woke up shaking, there was another minor earthquake in the same location as the one from two Sundays ago. Just south of Dartmouth, Massachusetts, this one was much weaker, but there were reports from those who did feel the ground shake shortly after midnight around Narragansett Bay.

This may have been an aftershock from the 3.8 of two weeks ago.

High-pressure moved in Saturday night with much colder air, that high is now moving off to the east with a return flow coming in from the east. That’s the cold-weather direction. 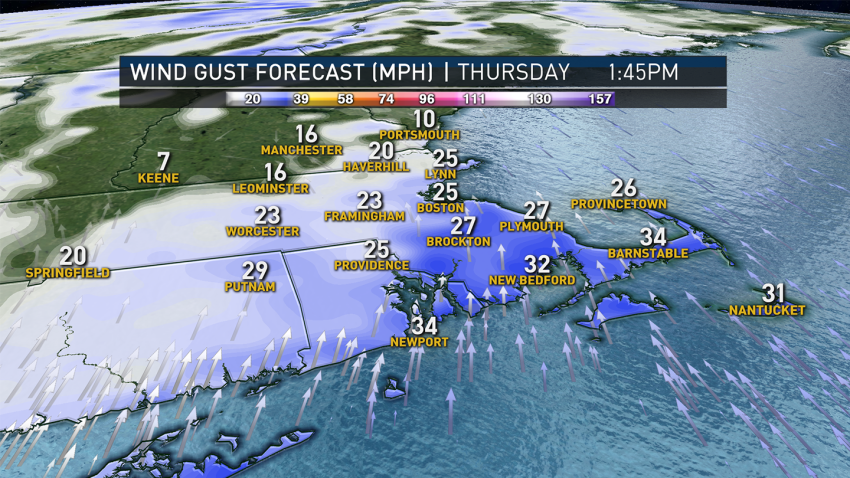 TIMELINE: An Hour-by-Hour Look at Rain, Storms on Thanksgiving

The sunshine we had Sunday morning is fading rapidly this afternoon with temperatures holding mostly in the 30s in lower 40s.

Snow was accumulating in western New York this morning, but it’s likely to lift north and mostly miss New England. But it is cold enough that any rain drops this afternoon can be mixed with a little sleet. For the most part though our roads remain dry through evening.

Low pressure will track across Montreal Sunday night, that’ll push warmer air into New England thanks to the counter clockwise flow. Wind from the south tonight will push the temperature up into the 50s in southern New England.

We should all be warm enough for rain except for in far northern Maine where there is a winter weather advisory for some ice and snow late tonight.

A cold front crosses from west to east Monday with downpours likely through midday. West of the Connecticut River, the sun should come out in the afternoon with a temperature falling back down through the 40s into the 30s.

In eastern New England, we likely stay damp through early afternoon with temperatures holding in the 50s for much of the day before falling back rapidly toward sunset.

A new batch of cold air comes in Monday night with clearing sky and a low temperature in the 20s and 30s.

The storm to our north will be strengthening rapidly with windy conditions on Tuesday morning. The wind chill factor will be in the single numbers and teens, with wind from the north gusting past 35 mph. In Maine the wind may gust pass 50 mph, and we may need a wind advisory.

High-pressure on Tuesday night means a clear and cold night with a low temperature in the teens north and 20s to 30s south.

The next weather system is racing toward us from the middle of the nation on Wednesday with clouds returning and a high temperature in the low 40s. That storm system looks like it’s going to weaken and track right over us Wednesday night and early Thursday on Thanksgiving day.

There will probably be light rain to start our holiday, but it’s a really low-confidence forecast. Any change in timing or strength could result in more in the way of rainfall perhaps lasting into the afternoon. It may be cold enough for a wintry mix at the Canadian border, but for most of us it should warm back into the 50s for Thanksgiving, hopefully with some sunshine at least by afternoon.

Temperatures look like they should stay on the mild side with drying late week, as seen in our First Alert 10-day forecast.